With the Fall Down Classic just around the corner lots of guys are trying to turn up their squash game to be ready for the tournament for next weekend.

The battle for the state of Michigan happened on Monday Night at WSF. No this was not the Michigan vs Michigan State football game. Mike Twiner formerly of South Carolina now Dearborn and Greg Deeg from the Dee. Twiner new to WSF has been quick to show everybody that despite being from South Carolina he knows how to play squash. Twiner has beaten up all his opponents so far and Monday against Deeg was not any different. Twiner defeated Deeg 3 games to zero and took home the Paul Bunyan Trophy.

This Fall League Jarrod Matties made the big jump to Monday Nights and has been very impressive in his matches. All of Matties’s matches have gone 5 games and he has won 4 of those matches. On night Monday he played the Hard Hitting Tim Autterson in a slug fest. When the dust settle it was only Matties that was left standing and with this victory Matties pretty much assured himself a spot in A6A. 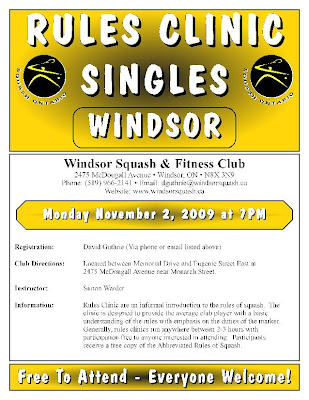 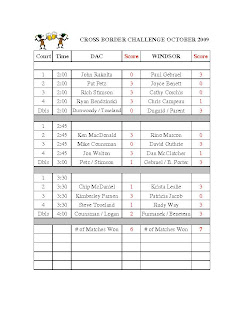 The Cross Border Challenge on Saturday, October 24/09 was full of many surprises. WSF was looking to extend their long winning streak over the DAC. Unfortunately for them the DAC boys came to Windsor looking to take home the Cross Border Challenge trophy with them.
Early on in the challenge the DAC was quick to build up a lead. After some tough matches Windsor started to find their winning form and pulled even after 12 matches. This meant that the final match would determine the champion of the Cross Border Challenge.
The final match was on the doubles court between Stan Furmanek/ Tom Beneteau (WSF) versus Peter Logan/ Mike Cousnmen (DAC). Neither side wanted to let their team down. Furmanek/Beneteau set the early pace by stealing the 1st game, but Logan/ Cousnmen came back to win the next two. In the 4th game Beneteau/ Furmanek were hanging on and facing a possible defeat when they rallied and stole the 4th game. In the 5th Furmanek/ Beneteau put on a great display of shot making ability that kept finding the nick. Logan/ Cousnmen tried to answer but they had run out of gas. This great victory for WSF kept the trophy at home and the DAC wondering if they would ever retain the trophy again.

For the DAC version of the Challenge Check Out Mick Joint’s Squash Blog
http://thesquashjoint.blogspot.com
at 10:49 PM 2 comments:

The Chatham Boys crashed the party at WSF.
Dan Vanmoorsel and Wayne Carroll both have been making the commute from Chatham to Windsor every Monday Night to play in our squash league. Last night they made a loud statement by whipping both their opponents soundly. Vanmoorsel finally found his winning form by upsetting Mike “Doc” Connelly by the score of three games to none. Vanmoorsel was so pumped by his victory that he was buying everyone beer following the match. This victory really put A1 up for grabs. Meanwhile Carroll also broke through into the win column with his victory over Michael Sonne. Carroll’s off season training program is finally paying dividends. He will be a tough player to beat now. Watch out everyone in A6.

Doug Fields continues to show that he belongs in A1 not A2. The surprising upset of Kevin Furmanek prior to the start of the league has put a new step into his game. Fields’ improved shot making ability has caught his opponents off guard. Last night Rob Charlebois, after losing to Fields, was surprised, not only by his improved shots but, that his new fitness level has brought a new dimension to his game. Watch out for Fields as he is a force on the squash court and at the bowling alley. 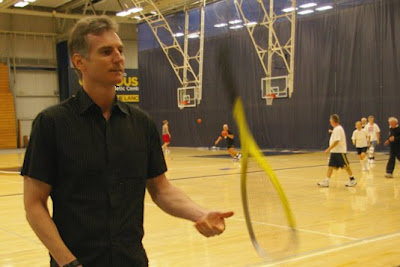 Breaking News: Sean Horton of Windsor Squash and Fitness wins gold at the World Master's Game. Horton defeated Sjef Van Der Heijden of Netherlands by the score of 3 games to none. Congratulations Sean you made everyone at WSF proud.
at 1:52 PM 1 comment: 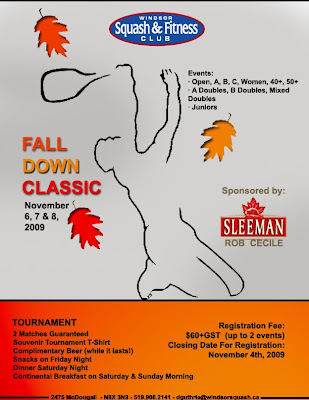 Email ThisBlogThis!Share to TwitterShare to FacebookShare to Pinterest
Labels: 2009 Fall Down Classic

As the weather gets colder and the leaves change colour the action on the squash courts is really starting to heat up. Tuesday night the Fall B League carried on with many guys working hard to prove themselves to their fellow opponents.

Both Dan “Steady” McLatcher and the young Khaled Alhakim were looking to make their mark on Tuesday. McLatcher wanted to show Alhakim that his “good shot making” ability was going to carry him to victory. Although McLatcher’s shots were tight and in the corners, Alhakim used his cat like reflexes to keep the balance of the match up in the air. In the end McLatcher had a couple of nick shots that carried him to victory in the fifth game. Alhakim although might be a little tougher next time around as his skills are getting better every time he steps onto the court.

B3 is full of young and upcoming players who want to show that they can play with the big boys. Unfortunately for them Jim Oakley is not interested in giving out charity to them. On Tuesday Oakley showed Bruce “Summer League Champion” Jean that the game of squash is not all about hard shots. Oakley used a wide range of shots that confused the younger Jean. After Oakley defeated Jean he was quick to challenge anyone else who was watching the match to determine if they could do better than Jean. No one accepted the challenge.

Mel Silva is off to a fast start in B2 by winning both of his games by the score of 3 games to none. Silva due to badly injuring his shoulder in a match was forced to withdraw from the league last winter. With this injury on his shoulders many people around the club were wondering if Silva would be able to regain his dominate form that he displayed last winter. Based on the result from his 1st two matches in this league, I think there is little doubt that Silva will be a force in B2.
at 10:35 AM No comments:

Email ThisBlogThis!Share to TwitterShare to FacebookShare to Pinterest
Labels: Fall B League 2009

Finally all the matches from the 2009 Summer Die Hard League have been completed.
These are your Champions

Thank You to everyone who played in the Summer Die Hard League and Congratulations to the Winners
at 5:59 AM No comments: 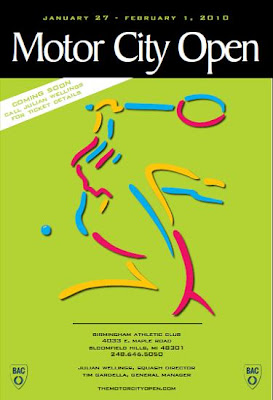 Call Julian Wellings at the Birmingham Athletic Club For Ticket Info.
http://themotorcityopen.com/
at 8:29 PM No comments: 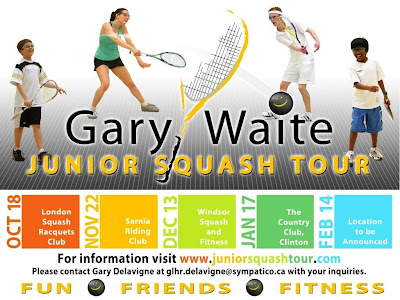 The New Gary Waite Junior Squash Tour kicks off Oct 18/09 at the London Squash Racquets Club
The Tour will be here in Windsor on Sunday December 13/09.
For full details please contact Gary Delavigne at glhr.delavigne@sympatico.ca
at 2:46 PM No comments:

Monday Night League action resumed last night. Some players have been quick to get out of the starting blocks hoping to set the pace for the rest of the league to follow.

Greg Deeg has been impressive in his 1st two matches. In week one he made quick work of Rob Charlebois. On Monday night he drew Scott “The Hammer” Preston. Deeg although was very sluggish for the 1st two games as Preston seemed to be on his way to an easy 3 games to none victory when Deeg regained his form. In the 3rd game Deeg’s shots became much tighter and were no longer bouncing in the middle of the court. Deeg used this new found confidence to win the match in the 5th game. Preston seemed a little rusty but indicated that he will be ready for the rematch.

Ron “The Diver” Funkenhasuer fresh from the Caboto Club circuit has been quick to make his name known around the halls of WSF. Funkenhasuer was impressive in week one with a strong victory over Mark “Doc” Lackorzynski. This week he battled Shawn Filice. Again Funkenhasuer was a machine on the court diving for loose shots and dominating the front court action. Filice struggled find the proper answer for Funkenhauser’s quickness. At this rate Funkenhasuer will be playing with some of the big names in A1.

Stefan “Young Gun” Houbtchev is fresh off his strong performance at The Club at White Oaks (Junior Gold #1) where he took the consultations finals over fellow WSF Junior David “Magic” Mill. Monday Houbtchev picked up where he left off and soundly defeated Michael Sonne. Houbtchev’s impressive play has pushed his team (Team#1) into 1st place. Also after two matches Houbtchev is the league’s Top Point Accumulator.

Don’t Forget to Give Your Team a Name. Prizes will be awarded for the Best Name.
at 9:39 PM No comments:

This is a great article by our favorite pro Mick Joint(DAC) on the Etiquette of Squash. Reading the article may give you some pointers on how to win the Sportsmanship Award (Ray Weldon Award) in the Fall League.

Check Out the New and Improved MSRA web site. I think you will agree that this is an excellent improvement.

http://www.michigansquash.org/
at 8:04 PM No comments: