Save the Date!  This year will be our 3rd annual golf tournament and we have decided to change the format.  We are sending this out much earlier than usual because we have much bigger plans for the tournament.  The venue has moved to Rochester Place and we have changed the date to take advantage of the nicer weather.  The new date is Saturday, July 16.  We have also combined the golf with a summer party for our non-golfers.
Rochester is a great venue for a summer party and it will give our non-golfing members an opportunity to join the golfers for dinner and party after their round.  We will have a DJ, prize table and an assortment of games.
We appreciate those who sponsored last year and again this year we are looking for sponsors.  We have formalized our sponsorship program and a letter will be going out shortly to all potential sponsors.  Sponsorship this year will be $250 and that will get you signage on a hole, acknowledgement on the junior squash bulletin board and on our social media.  Also, we are accepting donations for items to auction off.
Payment can be made by cash or cheque (payable to WSF Junior Fund).  Sorry no house charge.  Sign up is open and can be done at the front desk. 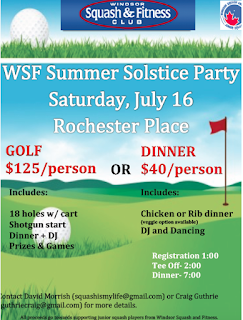 Email ThisBlogThis!Share to TwitterShare to FacebookShare to Pinterest
Labels: golf

What a weekend of squash!  The competitiveness (is that a word?) throughout all the divisions was incredible.  Where to begin?  Let's start with the B draw.  The B draw became the draw that the "bracket challenge" took place in.  It was a full 32 player draw and there were no clear favourites.  Luca Dalla Bona was the local favourite chosen to win it, while the out-of-towners stayed loyal and chose their players.  In the end, only 1 person correctly chose one of the finalists and he ended up $190 richer!  Complete breakdown of score can be found here.
The C draw was hotly contested throughout the weekend but in the end it was 2 local buddies playing in the final.  Adam Pole and James Konrad played their 34th match of the year to decide the winner.  Despite James' new found fitness, Adam had too many shots for James to handle.  Bragging rights belong to Adam for the next 6 months. Congratulations to Adam for winning the C draw!
The A division was a very tough division all weekend.  All matches were close and it was anyones draw to lose.  However, our own Mr. Ben Gay... I mean David Morrish,  somehow was still standing (barely) late Sunday afternoon to claim the A draw.  Dave's shot-making overcame all his opponents strengths.  I think David has booked himself "unable to walk for the next week".  And to think he wanted to play 40+......
The Open final brought out many spectators who were keen to see how the student-who-moved-away would do against the teacher-who-trained-him.  Yes, David Mill vs. Graeme.  Both players seemed in top notch form all weekend and the final was a very entertaining event.  However, as all of us adults will find, our upward curve (or is it downward?) isn't quite as steep as the juniors.  David proved too much for Graeme and took the match 3-1.
While many of the juniors opted to play in the skilled divisions, we still had a strong junior division draw.  The winner of the junior division and possibly also the player that played the most matches in one weekend was newcomer Alec Cerimagic.  You could see Alec get stronger every match he played as the weekend went on.  Oh to be young....
The doubles draws proved to be as entertaining as always.  The Women's division was extremely close with Hannah Guthrie and Mackenzie Elliott winning two 5-gamers in a row to take the win.  In the mixed doubles division, Herb Funkenhauser and Marg Holman defeated Steve (I haven't slept this weekend) Allen and Janice Funkenhauser.  Janice, in an attempt to improve her chances for a win, upgraded her partner with a newer and younger model but to no avail.  The B doubles final went the distance with Dave Guthrie and Dean Lansens taking on an all-female Seth team.  In the end, the girls out-mistaked the boys.
The A final was an all-London affair, well almost.  Windsor was represented by Mark Eugeni as Brad Hanebury's partner against Chris Boden and Caleb Quinlan.  Mark and Brad just had too many shots for the young upstarts from London.
All in all it was a great weekend.  Thanks to everyone that came from out of town (London, Sarnia), thanks to the beer sponsors (Jeff Derochie, Sleeman's, Anonymous(no, not the hacker group)), and thanks to Graeme and Dave for putting on a great event.  Final standings can be found here.
at 12:06 AM No comments:

White Oaks in St. Catherines was the host site of this year's Ontario Open and Windsor had 15 players participating.  This tournament always brings out the best players and the competition was fierce.  Windsor players were also fortunate enough to be coached by Anthony Graham, an active PSA pro who was in town for the weekend to train with Dave.  However, the strength of the draw took its toll on Windsor as Aparna, Ananaya, Amin, David, Sara, and Berto were the only ones who were able to pull out a first round victory and stay in the main round.  The rest of the weekend saw great squash amongst all the Windsor players.  Once again Ananya Maheshwari dominated the U11 without losing a game the entire tournament and add another title to her amazing season.  Well done Ananya!  Sara Khan also won the consolation draw.
This tournament is also when Squash Ontario awards one female and one male player for the Jim Mason Play Fair Award.  The award recognizes players who have demonstrated fair play on and off the court and is an ambassador for the game of squash in Ontario.  This year's recipient was none other than our David Mill.  David was honoured for his great demeanour as a player and also being a positive influence on squash in Ontario.  Jamie Nicholls (Executive Director of Squash Ontario) 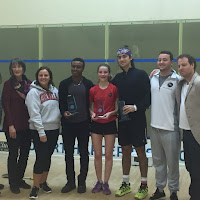 also took this opportunity to recognized the "amazing" things that are going on in Windsor right now. Congratulations David, you earned it!
All the juniors would like to thank Anthony for coaching them this weekend.  Full results can be found here.
at 8:44 PM No comments: