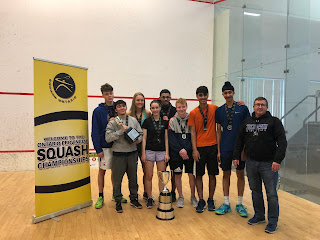 This weekend was the Jim Mason Cup in Toronto.  Jim Mason was a huge advocate of high school squash in Ontario and this event has been running since the mid-1980's.  The tournament is divided into 3 divisions, ranked, semi-ranked, emerging.  All schools participate as a team.  Players are ranked from 1-7 on each team and you play the other team's respective 1-7.  This year, 20 schools and 115 players took part.  Tecumseh Vista entered as the favourite in the ranked division and looking to defend last year's title.  Sandwich was a newcomer to this event and entered a team into the semi-ranked division.
The Sandwich team of Gavin Chamandy, Mehrab Pirzada, Jacob Nixon, Dan Zuidema and Courtney Furmanek played incredibly, but being short 2 players put them behind in every match they played.  In the end, Sandwich finished in 7th place in their division.  On the bright side, every player on Sandwich's team is back for next year and they are adding a couple more strong player to their roster.  Sandwich will be a team to be reckoned with next year.
Tecumseh Vista cruised through all their matches, barely losing a match leading to the finals.  In the finals they came up against a perennial strong team in Lawrence Park.  Lawrence Park had multiple nationally ranked players including Erica McGillicudy (2nd place in this years US Open).          The finals started with Phil Dimitrov going up against a regular on the Gold circuit.  Unfortunately for Phil, he woke up Saturday feeling ill.  Despite going down big in game 1, Phil managed to claw back to steal game 1.  After realizing he didn't want to engage in rallies, he relied on his shot-making which proved to be a great move.  Phil couldn't miss as he hit winner after winner, giving Vista a 1-0 lead.
Next up was Rajan Sandhu.  Rajan also went down big in game1 but ended up turning it around and snuck out game 1.  After that, it was all Rajan as he easily defeated his opponent to give Vista a 2-0 lead.  Our next two matches of George Smyrnis and Armaan Sandhu didn't work out in our favour.  While both players played really well, they were up against very tough players.  2-2.
With 3 matches to go, it was anyone's title.  Luca Dalla Bona was next up against a very good players who has been moving up the Ontario rankings.  Luca looked like the Luca of old, moving his opponent all around the court while hitting winners as he went up 2-0.  Luca was up 10-7 in the 3rd when he could have taken the match on a questionable stroke.  Displaying incredible sportsmanship, Luca didn't want to end the match on a controversial call.  Unfortunately, his opponent went on to win that game and the next game.  Tied at 2-2, Luca has his hands full.  Game 5 went back and forth with Luca edging out his opponent to put Vista up 3-2. 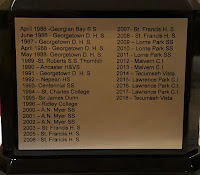 With only Hannah and Jagroop left, Vista just had to win just one match.  Both matches went on simultaneously.  Hannah was up against the reigning Ontario junior doubles champion, while Jagroop was going up against Ontario's Player of the Year.   Jagroop won game 1 in extra points while Hannah won 11-6.  Next game Jagroop lost in another close one, while Hannah managed an extra points win.  Game 3 saw Jagroop lose another very close one.  Fortunately, Hannah was able to take game 3 and secure the win for Tecumseh Vista.
The win marks Tecumseh Vista's 3rd win in 4 years at this tournament.  Unfortunately, we are saying good-bye to 3 of our seniors who have been instrumental in Windsor junior squash over the years.  Thank you Luca, Phil and Hannah for your contributions and leadership to Tecumseh Vista and WSF squash.  You will be missed but you have gone out on a high note.
Pictures of the event can be found here.
at 9:03 PM 4 comments: