March 7 thru March 13/2011
Location: Detroit Athletic Club
Based on the total number of entries we will try to offer: 3.0, 3.5, 4.0, 4.5, 5.0, 5.5.
Entry is free, however you must be an MSRA member to enter ($25).
Join online at: www.michigansquash.org/
Entry deadline is Friday March 4th. @ 4:00pmEmail your entries to Phil Blagdurn: blagdurnp@dteenergy.com
You must include the following: Your full name
The class you feel is your appropriate skill level.
Your Squash Club Affiliation
Daytime phone number you can be reached for the draw sheet
This is a Great Event and Great Opportunity to Support The MSRA.
at 5:00 PM No comments: 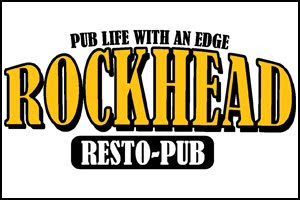 Rotating Partners
Monday Nights : A Divison - SundayMornings: B/ Mixed Division
Cost:$20.00
Weekly Drink Specials, Prizes for Winners and Pizza Party at the end of League.
Deadline to Sign Up March 7/11

Windsor Squash and Fitness had a strong presence once again at the 2011 DAC Squash Classic with thirty-five members from our local club making the trip across the border. London Squash was also well represented with twenty five of their own players. Great thanks to Mick Joint and his staff for doing a fantastic job.

Three words can sum up the DAC Squash Classic, squash, food and of course beer. The tournament is almost like a triathlon, as each part equally contributes to the overall experience. How much can you eat and drink and still play at a high level squash. Some WSF members actually thought they could compete in all three events and win their division. Some did okay until they reached Sunday when their bodies could no longer react properly. Andrew Caille’s performance is a perfect example; he played some solid squash Thursday thru Saturday and seemed primed to capture the 5.0 title while at the same time being ever so present on late night scene. By Sunday morning his squash play severely dropped as result from excessive partying fatigue set in and he was playing more like Elmer Fudd than David Palmer. Despite this Caille had a very strong showing and looks to be ready to defend his 5.0 MSRA Championship in a few weeks.

While Caille and others were painting the town Brian Porter was recovering from a bout with the flu. Porter spent the better part of Saturday in bed and despite being sick he still managed to reach the 5.0 finals. Along the way Porter had some tough matches. In the semi finals he played nemesis Ricardo Ramos from Lifetime Fitness of Troy, it was a hard fought four game match that appeared to be on it way to a fifth, when late in the game Ramos made some uncharacteristic errors that allowed Porter to steal the game and match from Ramos. In the finals Porter met the upstart John Rakolta from the Detroit Athletic Club. Rakolta’s play was nearly flawless in the matches leading up to the finals, however they did not fair him well against WSF very own Brian Porter. Porter experience allowed him to grind out the 5.0 Championship in four games.


Some of the new WSF members to make the trip this year were doubles team Herb Funkenhauser and Dave Hornby. Funkenhauser and Hornby had heard through fellow WSF members how great the DAC Squash Classic was and decided it was time for them to check it out for themselves. After registering Funkenhauser and Hornby began a hard training regiment. They spent many weeks on the doubles court practicing and many hours in the weight room preparing for this tournament. By the time tournament came they were in the best shape of their lives. Or at least that was until they saw the amount of food in the buffet at the tournament. Needless to say from that point on Funkenhauser and Hornby had little interest in whether they had won their matches or not but rather on how soon they could return to the buffet line. Both of them enjoyed themselves so much that they are making plans to return next year. 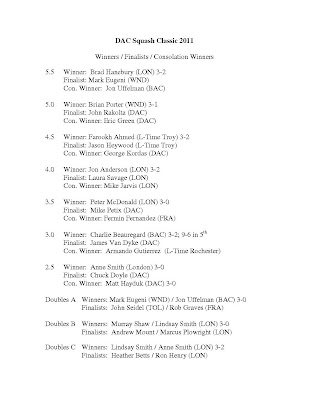 Squash Ontario is pleased to announcethe release of the February issue of Squash Ontario E-Magazine!
The E-Magazine features the latest squash news, informative articles, and event listings pertinent to all squash enthusiasts across Ontario! From recreational to competitive; junior to senior; singles to doubles; coach to official - this E-Magazine is for you!!

Click here http://www.squashontario.com/documents/february2011.pdf
Look for the next issue in March, 2011!
at 11:27 AM No comments: