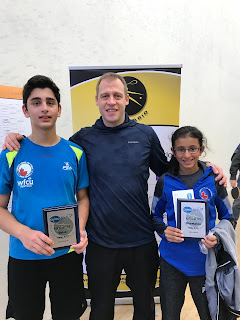 10 of WSF juniors competed at Ontario Racquet Club in Mississauga at the Jesters Gold#3.  As this was a CORE event (Team Canada qualifier), the best from around Canada showed up to earn points for the team.  WSF juniors continue to play well and push the established top players.   The highlights of the weekend were Amin Khan, finishing 3rd in his first attempt at the ultra-competitive U17 division and Ananya Maheshwari winning the U13 division.  Ananya has dominated her age group for a number of years now and continues to play better and better.  Well done Ananya!
Ryan Guthrie and Aaron Nagy played very tough in their first rounds but could not hang on for wins.  However, both found success in the bronze division and ended up playing each other in the finals.  It is always tough playing your training partner in a tournament but these played their hearts out.  Rallies were very punishing and both displayed incredible shot-making.  Aaron ended up pulling it out in the end, 3-1.
Sara Khan and Hannah Guthrie continue to close the gap on the top players in Canada.  There is little difference between them and the other players in the U17/19 draws.  Hannah lost a tough 5 game match to one of the top seeds while Sara, drawing the #1 seed, played her tough with very few easy points.
Aparna Maheshwari, made it to the semi's where she ran into the #1 seed.  Despite playing with an injury Aparna played very hard but in the end lost 3-0.  Aparna went on the finish 4th.
Usman Khan always plays everyone tough.  There is no easy point with him and he always give players a hard time with his persistent retrieving and power game.  He lost a heartbreaker 12-10 in the fifth in the consolation semi-finals.
This weekend also brought out some newer faces to the gold scene.  Gina Marinelli is approaching the end of her junior career and wanted to get in her last tournament.  Gina played very well and will go on and become a very successful club player.
Subhan Shabaz is getting his feet wet with the higher level of play.  Despite his inexperience he showed that he is ready to compete in the U13 draw.
Final results can be found here.
at 10:35 PM No comments: 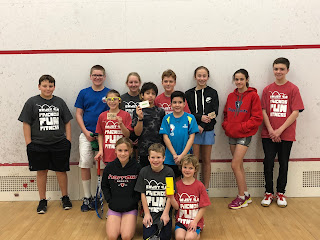 It was a very busy weekend at WSF as we hosted both the Southwest Ontario Winter Games tryouts.  This tournament is to determine who the representatives will be for Southwestern Ontario at the Ontario Winter Games on March 1-4th.  Players from as far from London came for the day to try out.  This year it looks like a Windsor-dominated team.

Good luck to all competitors.

Sunday saw 38 competitors play in the Gary Waite Tournament.  The Gary Waite Tournament is designed to players just beginning to play squash and looking for some tournament competition.  It travels throughout Ontario and has a different stop each month.  There were many exciting matches, tears and laughs throughout the day as players competed.  ThWinners are as follows: