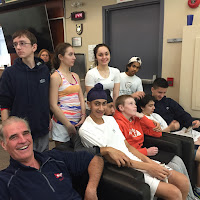 If you haven't been to the Toronto Cricket and Curling Club, it is quite an experience.  It is a very hopping place with an unbelievable amount of activity.  The club dates back to the 1880s yet still has the feel of a very new club.  If you get tired of watching squash, you can go watch curling or figure skating or tennis.  Or you could just hang out in large and quaint restaurant.  The squash area has 6 single courts and 3 doubles courts, all with great viewing.  Good thing too because while we were there, they were playing the semis and finals of a PSA event.

14 of our juniors participated in the Gold event here this weekend.   Our progress was very clear this weekend as David Mill, Sara Khan, Amin Khan, Aparna Maheshwari and Hannah Guthrie all advanced into the main rounds.  Unfortunately, none of them won in the next round.  However, David Mill lost 12-10 in the fifth, while Sara, Amin, Aparna and Hannah all lost in very close matches.  The same can be said for all our other juniors.  No one was outplayed and all matches very tight.  We even had U11 Canadian champ Ananya Maheshwari playing up a division.  Ananya has dominated the U11 division and felt it was time to take her game to the next level.  That would be a 10 year old playing against 12 year olds!
By the time the weekend was over, 10 out of our 14 ended up winning at least one match and for a few of them, this was their first gold tournament win.  Aparna Maheswari won the U13 Consolation, David finished 3rd and Ananya won the U13 Bronze division.  To sum up how close we are.  Berto Mill had 4 match balls in the first round against the eventual winner.
Final results can be found here and pictures can be found here.
at 7:34 PM No comments:


If you came by the club Friday you might have thought that you had your days wrong and it was Saturday with all the juniors around.  Or you may have thought you haven't seen many of the juniors of late and wow, have they grown.  No, it was just the 2nd annual Windsor High School Tournament.  The tournament has expanded in it second year and this year we had 25 students from 3 schools (Kennedy, Massey, Vista) competing.  This tournament is designed for players either new to the game or players that are not yet participating in Gold level tournaments.

After a quick seeding round, players were placed in A, B, and C divisions.  Players were competing for individual honours as well as team points.  The better you did in your draw, the more points that went toward your team.  Vista, the reigning champs, showed up with a handful of players that dominated in last year's tournament and also some new face to the team.  Massey was a very new addition to the game and many of their players had only played a couple of times.  However, under the tutelage of Sara Khan, they showed much promise.  I think Kennedy thought they were in a basketball tournament as I don't think they had one player under 6 feet tall.
Grace Kim has been working hard with the Kennedy, training twice a week for months.  The other teams knew they were in trouble when Kennedy showed up sporting some nice uniforms.  And it was Kennedy's day as they dominated the draws.  The A final saw Kennedy's Dante Fornaserio defeat Vista's Matt Jankuloski.  The final match saw great retrieving and shot-making by both players.  In the B final it was an all Kennedy matchup as saw Erik Erickson defeat his teammate Gina Marinelli.  The C final had Massey's Mohid Nadeem defeat Vista's Hana Obeido in a very close match.
Congratulations to coach Kim for doing such a great job with her team.  They clearly improved as the season went on.  However, I heard Vista and Massey talking about dominating this event next year.  Kennedy and Vista are moving on the Ontario High School Squash Championships in Toronto at the end of April.
Special thanks to Nik Bistrev, David Morrish and Graeme for helping run this event.
at 12:01 AM No comments: 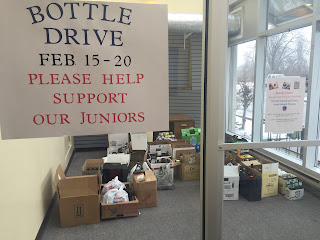 WSF Bottle Drive is picking up a lot of steam.  You may (or may not) have noticed all the bottles piling up in the front room as you enter the club.  The drive has been extended one more week for anyone who wants to donate bottles.  Only wine and beer bottles will be accepted.  Thanks for your support
at 1:36 PM No comments: 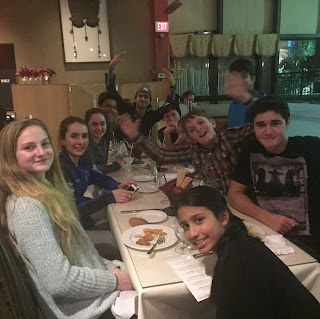 11 of our juniors, plus adopted Windsorites, Rily Bore (Sarnia), Gabe VanMorsel (Chatham), Natasha Pensler (USA) participated this weekend in Gold #3 at the National Squash Academy. Unfortunately, high school exams kept many of our juniors out of this tournament.  This was also David Morrish's first tournament with our juniors.  I know he was very impressed with their conduct this weekend.
It was a great weekend of squash as our juniors continued to improve at these events.  On Friday night, our juniors played very tough and were losing in 5 games to players that beat them in 3 or 4 games in the past.  A number of opponents and parents commented on how much improvement our players have made in just a couple of months. 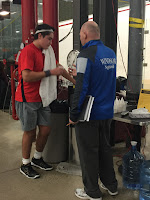 Saturday saw some incredibly intense squash.  Berto Mill was typical Berto, diving all over the court and making his opponents suffer with his incredible retrieving.  He also had the rally of the weekend that saw him dive, play his next shot from his bum and get up to win the rally.  Maanav made an incredible comeback after being down 7-0 in game 5 to win his match.  Mackenzie made every rally tough on her opponents.  Vishaal had some incredibly long rallies with the top seeded player in his division.  Natasha Pensler, playing up a division, played a great match in beating one on the tougher players in her draw.  Luca Dalla Bona played by far some of the best squash he has ever played.  He played a smart game and worked his opponents all over the court and clearly has jumped to the next level.

Come Sunday, Ananya, Hannah, Vishaal, Maanav, David, Natasha, Gabe, Riley were all still playing. At the end of the day, Hannah won the Bronze division and David won the consolation. Ananya won her 3rd Gold tournament.  Ananya continued her dominance despite making a concerted effort to transition to one-handed play.  She looks stronger than ever!
Draws can be find here.  Pictures from the weekend can be found here.