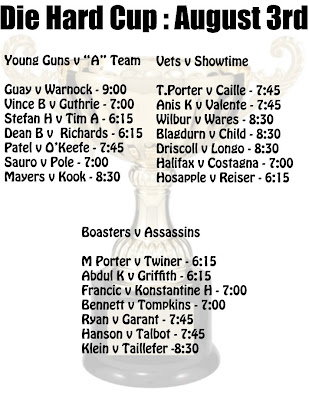 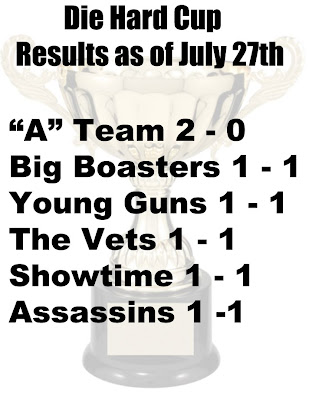 Die Hard Cup - Round Up - Will Return This Week. I Apologize For Not Having A Round Up Last Week But I Was On Vacation. In Case you were wondering it was an Excellent Vacation!!!!

The 2nd week of Die Hard Cup kicked off with many of the players determined to insure their team a victory. Despite the fact that the Die Hard Cup is a summer league many of the guys are leaving nothing to chance. Some of the early notable matches were Justin “Raver” Warnock beating Andrew “Beavis from Beavis and Butthead” Caille in five games. Another exciting early match was Mike “Professor” Twiner against Tom “The Owner” Porter. Twiner used his patent cross court shots to defeat Porter in three games.

The most interesting match of the night was watching Barry “Dive Guy” Garant play Dan “Silky Smooth” Driscoll. Garant’s style of play is not always pretty to watch but it is effective. Driscoll on the other hand was very smooth and fluent on the squash court. Watching this match was like watching an old episode of the Odd Couple. Driscoll made it clear from beginning of the match that he would have no part of Garant’s all over the court style of play. Driscoll kept his shot selection to tight and deep shots in the corners. These shots forced Garant to be defensive. Driscoll maintained this approach thoughout the match and defeated Garant in three games. This win proved to be extremely important as it allowed Team “Vets” to break the tie with the Assassins and claim victory over them. 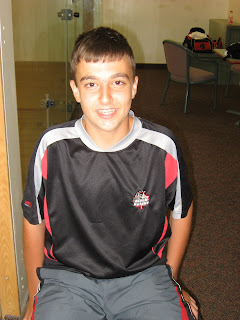 The foremost important match of the night was between Mike “Muscle Shirt” Wilbur and Konstantin “The Runner” Houbtchev. Wilbur has made a career of intimidating his opponents by flexing his forearm muscles while wearing his signature muscle t-shirt. This intimidation technique has worked well for Wilbur in the past until he ran into the father and son combination of Konstantin and Stefan Houbtchev. Last week Stefan (Inserted Photo) who is only entering the 8th grade laughed at Wilbur’s forearms and quickly put up a 2 game lead. Wilbur worked hard to force a fifth game but ran out of gas. Following the match Stefan made the comment that maybe Wilbur did too many bench presses before the match. Wilbur was quick to respond and he would get his revenge against Konstantin. On Tuesday night Konstantin played Wilbur. Not much had changed for Wilbur because he again gave up a two game lead before making a comeback that only stretched the match to a fourth game. After the match Konstantin stated the he thought Wilbur might try a new technique instead of bullying his opponents in order to win a match. 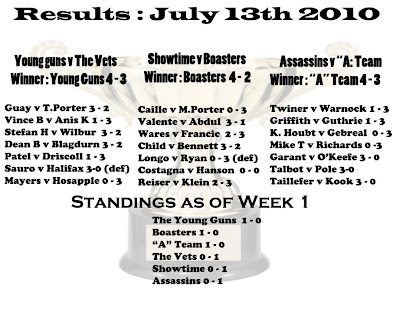 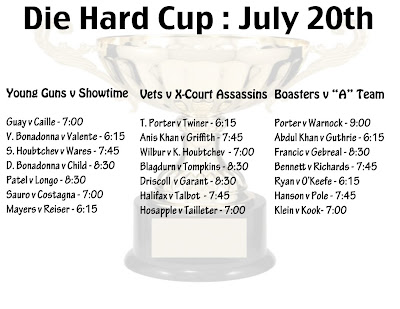 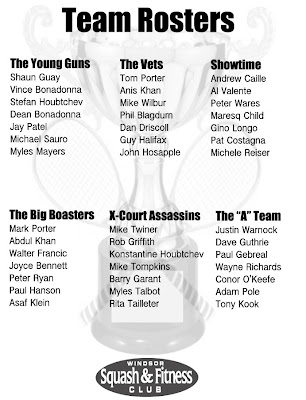 Die Hard Cup Squash League kicked off on Tuesday Night. This league is a change from the past Summer Squash Leagues. It’s a little more spiced up and has a little more punch to it. It’s like drinking margaritas at Mexican Village on Mondays. Some of the changes to this league are that WSF has finally converted over to POINT A RALLY scoring system instead of point per serve. As well your individual scores do not determine how far you will go in the league, but how far your team will go. Everyone is selected to a Team. Each team has 7 players and players are ranked from 1 to 7 based on skill level. Each week teams will play against a different team and the team that wins the most matches is awarded the victory. Only the top 3 ranked players from each team will play their games to 11 points and the rest will play to 15 points. Also no rescheduling of matches will be allowed. If you cannot play your match please let me (David Guthrie) or Mark Porter know and we will find you a replacement. Each week there will be a draw prize and drink specials.

Enough with the new rules, now let’s talk about the squash action that was played on Tuesday Night. The Die Hard Cup with its new format has attracted newcomers and of these newcomers some were quick to make their presence known on and off the squash court. One of these rookies was Rita Tailleter who has been quietly practicing for about 3 months for this league and as result she made quick work of fellow newcomer Tony Kook in her 1st ever competitive squash match. Tailleter’s side kick Michelle Reiser also made her debut against Asaf Klein. They played an epic 5 game match that Klein barely pulled off the victory. After both of their matches Tailleter and Reiser felt they were ranked too low on their respective team.

Both Vince and Dean Bonadonna came out of hibernation and returned to the squash league after a year of absence from the game. Vince drew a tough match against Anis Khan and Dean played the wily veteran Phil “The Prince” Blagdurn. Khan wanted no part of Vince’s triumphant return and defeated Vince in 4 hard fought games. Despite the loss Vince liked the way he played and felt that his game was only going to improve. Meanwhile Dean played a tough hard 5 game match with Blagdurn. It was only in the fifth game that Dean used his quickness to out work Blagdurn and claimed victory. After the match Blagdurn, said he was tired of no one giving
him the respect on the court and vowed that he would no longer be buying beer for anyone anymore. 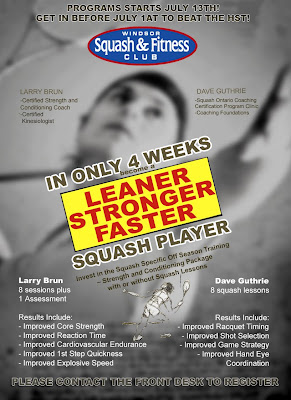