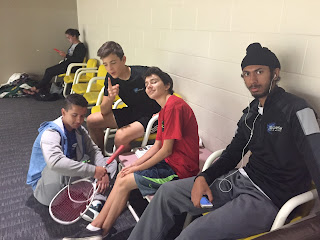 The first Squash Ontario Gold junior tournament was this weekend at Mayfair Parkway in Toronto and it saw a very large and impressive contingent from Windsor.  19 juniors from Windsor Squash and Fitness participated and Graeme also came up to provide coaching to each and every one of them.   Friday night got off to a bit of a rough start with many of our juniors drawing seeded players in the first round.  Despite this, every one of our juniors played these matches extremely tough and were never outclassed on the court.  At the end of Friday, only David Mill & Berto Mill stayed in the main round.  Amin Khan, Ananya & Aparna Maheshwari and Vishaal Mehta all played in a round robin format.
Saturday saw a lot of activity as it seemed like our kids were playing every time you turned around.  Berto got knocked out of the main round by Ravi Seth while David advanced to the finals on Sunday.  Some of the juniors advanced in the consolation while other got relegated to the bronze draw.  Ananya and Amin were steadily beating all their opponents in the round robin.  By the end of the day Saturday many of our players took up table tennis and basketball for the remainder of the weekend.
With only a handful of Windsor players still playing on Sunday, it gave everyone an opportunity to cheer on their teammates.  Mackenzie Elliot won her first gold match, advancing her to the finals of the U19 Bronze draw.  Unfortunately, Mackenzie came up against a very strong and older opponent.  Hannah Guthrie bounced back from a rough start by handily winning the U15 Bronze division.  Ananya breezed through her draw not even dropping a single game all tourney to win the U11 draw.  Great job Ananya. 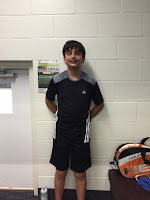 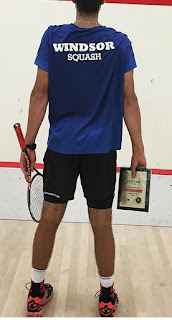 However, the most exciting match of the day was a nail-biter between Amin Khan and Griffin Manley for the U13 championship.  Amin went down 2 games despite playing great squash.  Amin kept the pace up and worked his opponent around the court and easily took the next 2 games.  Game 5 saw long rallies and tense shotmaking.  In the end Amin pulled it out 11-8, winning the U13 division.  Well done Amin!
The final match of the weekend saw David Mill and one of his training partners at the National Squash Academy, an Egyptian named Mohanad Hekel, play for gold.  Hekel has amazing array of deceptive shots (see Amr Shabana) as well as great retrieval skills.  David was out for redemption after losing to Mohanad at last year's Gold #3 at NSA.  This time around David proved too much for Mohanad to handle.  Congratulations to David for winning the first Gold tourney of the year!!!
All in all it was a great weekend of squash.  Final results can be found here.  Many of us overheard how good the "Windsor crew" looked in their clothing and about what a big impact we are making in the draws.  When you think back one year ago, many of these players were playing the Gary Waite tour, if they were playing tournaments at all.  The other comment that we heard was how much people were looking forward to coming back to Windsor for Gold #2, October 23, 24, 25.  Speaking of which, we are looking for sponsorship and volunteers for this tournament which is going to be far bigger than last year.  If you are interested please contact Graeme or Victoria.
at 3:47 PM 1 comment: 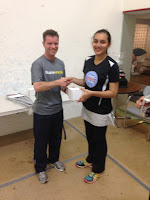 Congratulations to Sara Khan who got her season off to a great start with a win at the Nash Cup in London this weekend.  Sara won the Women's B draw by fighting off some very tough competition.  The first round saw Sara in a very tight match that she was able to squeeze through.  All that summer training paid off.  In the semis, Sara met up with the top seed but dispatched her 3-0, paving the way to the finals.  In the finals, she defeated the number 2 seed in 4 games.  Well done Sara!
In other matches, Paul Gabreal lost in the A finals while David Mill lost in the Open finals to Mick Joint.

Thank you to the 48 people that participated in our 2nd annual WSF Golf Tournament.  The weather cooperated and I believe a good time was had by all.  Last year's winners of Valente, Leavitt, Wilbur, Guthrie (Dave) just couldn't put it together this year.  Mike Wilbur was forced to carry the team and a big load he had to carry.  We had many rookie teams participate this year, most notably 8 of our juniors who should probably stick to squash.  And it was a new entrant into that tournament that ended up winning it.  Somehow, Jody Brown, Aaron Gillis, Matt McEachran and Graeme Williams(?????) turned in a -6.  What is more amazing about this score is that they basically did it as a threesome.  I thought they were in trouble when Graeme texted me an hour before tee-off asking if he could rent clubs at the course. :)  Well done guys, enjoy your Red Wings tickets.

The money raised from this event go into fund that is used throughout the year to assist and promote the game of squash and those playing it at the junior level.  This fund is used to subsidize our junior's lessons, travel, clinics, coaching certifications, and referring certifications.  It is also used to fund new, economically-challenged players to the game as well as assist entry into our tournament from players who would otherwise be unable to participate.

This event couldn't have happened without the following sponsors:

Also, we would like to thank the following who donated a door prizes:

All pictures from this event can be found here.  Stayed tuned for next year's event which promises to be bigger and better.
at 10:44 PM No comments:

The 2015 Die Hard Summer League final came to its conclusion 2 weeks ago.

In the final we had the Happy Tinners taking on Skid Boast as the 2 most consistent teams over the course of the Summer. 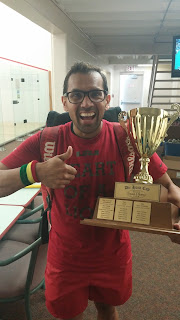 Since replacing Dave Guthrie at the top of the roster Emir Crowne had helped his team rack up the points and I heard many of his team mates comment that their name did not really suit with him at the helm.

Unfortunately many of the regulars were unable to make the final for The Happy Tinners but Skid Boast had a full team at they disposal.


All the matches were tight with Julian Paquette putting Skid Boast 1 up by beating Mark Morgan by 46pts to 33.  This was the 5th time these two had met this summer!

Marco carnival beat Guy Halifax in an earlier match 44-39 so things were 1-1 when Hannah Guthrie and Sara Khan stepped onto the court.  The quality of the match as high as both players showed the benefits of the hard work they had invested in their games over the summer.  In the end Sara won 41-37 to edge Skid Boast ahead.

Ryan Guthrie levelled things up by beating Adam Pole 49-39 also reducing the over all points difference too.  Things were getting close. 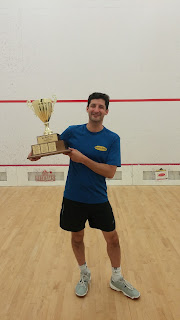 Emir Crowne and Andrew Little were last on and playing for the title.  Many neutrals had Andrew as the favourite especially in the 20 min format but Emir was on fire.  Using all his trickery and racket skills he never let Andrew settle and won 58-35 to win the Summer League for the Happy Winners!!!

The final standings were as follows: