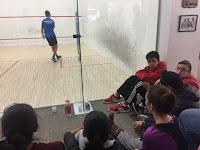 This weekend 11 of our juniors competed in the fourth gold event of the season at the Toronto Skating Cricket and Curling Club.  Friday night was quiet a busy night at the club as they had a doubles Pro-Am, a PSA event and the Junior Gold going on at the same time.  Even Gerry Dee made an appearance.  This event turned out to be the biggest junior event in a number of years as 150 players competed.  Friday didn't end for Windsor until 11:00 because, as luck would have it, Alex Mroczkowski, in his first Gold event, was the last match of the night.
After the first round matches only Amin and Luca won to stay in the main round of their respective
draws.  Luca played a phenomenal first round match against a very tough opponent.   He hung tough in
game five and kept pressure on his opponent, forcing him into many errors.
Day 2 saw matches start early in the morning and we were warned that 155 matches had to be played
in one day so to anticipate delays.  By the end of the day, courts were over 2 hours behind and again
Windsor was playing one of the last matches of the night.  The Windsor players played great on Saturday.
Jagroop was a tactician on the court, moving his opponent from front to back and side to side and
dominating much of his match.  However, a few bad breaks in the final game led to Jagroop losing the 5th.
Aparna showed much improvement by taking an opponent she had previously lost to in 3 to the 5th
game this time.  Hannah demonstrated great perseverance in her match after going down 2-0 to come back
and win in the 5th.  Ananya proved that she is not at all out of place in the U13 division as she ended up
winning the consolations.  Phil disposed of his Saturday opponents with his deft touch and retrieving ability.
Ryan's retrieving and deadly shots caused his opponents all kinds of problems in the U19 division.  Usman
was as entertaining as always as he frustrated his opponents (and sometimes spectators) by chasing
down every ball and never giving up.  Subhan, while new to gold tournaments, proved that he is ready to
play at this level.
Of course, Windsor had the last match of the night with Sara Khan.  Her 7:30 time turned into 10:00.  It
was great to see all of the juniors hang around to watch her play.  Sara was up against a formidable
opponent.  She played great, using her power to move her opponent all around the court.  However, in the
end it wasn't enough to take the match.
Despite the late Saturady finish, Sunday was another early start.  The highlight of the day was definitely
Amin playing in the U15 final.  It was a great match that had long rallies, great shot-making and amazing
retrieving.  Unfortunately, Amin's opponent was just too consistent and eventually forced Amin into
uncharacteristic errors.
All in all, the juniors played amazing this weekend.  The best part was the support and camaraderie
that the kids showed each other throughout the weekend.    Final results can be found here.
at 11:32 PM No comments: 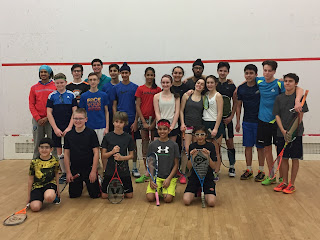 This past Wednesday night welcomed a great night of squash with Diego Elias, the 20 year old Peruvian World Junior Champion (fresh off a win over WR #6, Marwan Elshorbagy in the Motor City Open) and Alister Walker (former WR #12 from Botswana). The night started off with the pros helping Graeme and Dave with a junior squash session with the emphasis on their favourite shots (lobs and the backhand kills).  Some juniors had the chance to play a game with either Diego or Alistair!
After that, four of the highest bidders had the opportunity to play softball doubles with Alister and Diego, our pros (Graeme and Dave). The matches were, Graeme/Jeff Derochie vs. Alister/Luca Dalla Bona and Diego/Aaron Nagy vs. Dave/Nick Dimitrijevic. This time, beauty had beaten age in both first round matches which led to a Diego/Nagy vs. Alister/Dalla Bona matchup in the finals.  After many entertaining rallies between the two teams Alister/Dalla Bona managed to win the final match.
Finally, the pizza arrived and the real fun began. The match between the two pros started with a bang. Tight drives, perfect drops and rolling nicks were being hit from the onset of the match.  With the match tied at 2, the intensity and quality of rallies increased even more.  The amount of shots these two players got to was incredible! Just when you thought the rally was over one of the players would get to a shot you never would have thought they’d get to. In the end, Diego Elias managed to win the match. Thank you to everyone that came out to support this event, and to all the sponsors and to Graeme and Dave who put on this amazing event!
Here is a link to all the pictures.
at 9:13 PM No comments: