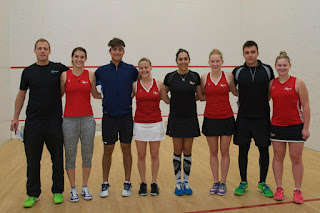 What a day for Windsor Squash & Fitness Club!  The fun began for our juniors as the Women's Pan-Am team (@dzlet,  @CornettSamantha,  @NikoleTodd1,  @HollieNaughton) showed up for a Q & A and a training session.  Our juniors got to see how much training goes into becoming one of the best in your sport.
The evening brought out what everyone was looking for... exhibition matches.  Before the main matches, the girls played games against many of our juniors.  I could have swore that I heard Kabir say he was going to win his game.  I never did find out how it ended.....  In the end the juniors appreciated the experience to hit with the team.
Finally it was time to see what Team Southwest could do against Team Canada.  First match was Elora-born, Sarnia-living, Windsor-favourite Micaala Seth taking on Danielle Letourneau.  Unfortunately for Team Southwest, Micaala wasn't at the top of her game and went down to Danielle.  Team Canada 1, Team Southwest 0.
Stefan Houbtchev took the court to compete against Hollie Naughton.  Hollie's retrieving and shot-making proved to be too much for Stefan to handle.  Team Canada 2, Team Southwest 0.
This put a lot of pressure on David Mill as he tried to outshoot Nicole Todd.  This was the most entertaining match of the night as they tried to outshoot each other, providing the audience with many entertaining shots.  Nicole played the entire match with a smile on her face which made the crowd think she was just enjoying running David around.  However, in the end, David couldn't close out the match.  Team Canada 3, Team Southwest 0.
This means that there was no way Team Southwest could win.  So the final match of the night (Graeme vs. Samantha Cornett) was about personal bragging rights.  Student vs. Coach.  Graeme played like he was 10 years younger (not really but he never reads the blog so he won't know I said this).  Graeme ended up with Team Southwest's only win.
It was great to see all the people out, old squash players and new and a great time was had by all.  Good luck in the Pan Am Games!  Here are all the pictures from the event.

I meant to post this for a while now but due to technical issues, I can't post it on our Youtube Channel nor embed it directly here.  So here is a link to a video montage I put together of the 24 Hour Squashathon from last month.  Once Graeme sees it he will realize how much fun he really had, he will be willing to do it again next year.  :)
at 12:39 PM No comments: