Squash World Champion was on Titanic

England's 23-year-old Charles Williams was squash's world champion in April 1912 and was on his way to New York to defend his title in a match against a Mr G. Standing, the American Champion, for a stake of a $5,000 purse.

Charles Eugene Williams
Williams, a professional squash player, had been practicing in the on-board squash court and had just gone for a cigarette when the ship hit the iceberg.
He rushed out onto the deck and witnessed the iceberg towering over the ship. He survived after subsequently leaping off the side of the ship and making it to one of the lifeboats.
Williams, who was traveling on a second class ticket, told reporters later that he had left the squash court at 10:30 pm on the fateful night and gone to the smoking room. It was while he was there, having a post-game cigarette, that he heard and felt a crash and rushed outside to see the iceberg towering 100 feet above the deck.
He reportedly jumped into a lifeboat from the starboard side and ended up aboard the rescue ship Carpathia, which took him and 704 other survivors to New York. The scheduled squash match was not played.
Williams lived until October 27,1935 when he passed away in Chicago, where he lived on Lakewood Avenue.

This Blog posting is courtesy of www.ProSquashTour.net
at 10:18 PM 1 comment:

Email ThisBlogThis!Share to TwitterShare to FacebookShare to Pinterest
Labels: Titanic

Out of Passion for the Sport, the Maple City Squash Club is Born 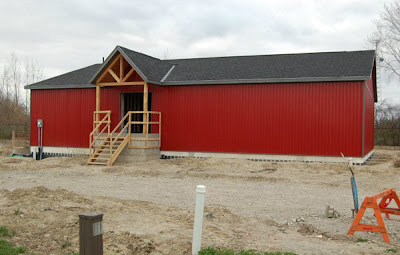 Sometimes the only way to achieve a dream, is to build it from the ground up yourself. That’s the model Chatham’s Dan Van Moorsel followed when he set out to create the Maple City Squash Club.

With the last of Chatham-Kent’s squash courts gone following the closure of the old YMCA, Van Moorsel set out on a quest to not only construct a new, state-of-the-art facility in Chatham, which is nearing completion, but also to build a strong local squash community.

Projected to open in late May, Van Moorsel already has 80 members registered for the new club, which is located at 36 Hart Place on Chatham’s Southeast side.

“I’ve played squash my whole life,” Van Moorsel explained about his reasoning for starting this project. “My kids have enjoyed it when we were at The Wheels or the YMCA. I miss it now that we don’t have it and there are 80 people right now that want it. That was the idea behind building it.”

For Van Moorsel, it wasn’t just about his past competitive experience or his family, it was about building healthy opportunities for Chatham-Kent youth,

“At the end of the day, Chatham seems to be a real team place. If you don’t want to play hockey, or baseball or one of those sports, what is your alternative? I think so many kids go to University and are lost for a sport. Not everyone wants to just run on a tredmill. When kids get there, a lot of kids pick up a racquet. So if I can teach them now, or at least show them and familiarize them with the game, when they go away to University or College they will know the game, and have something there instead of just wasting their time away.”

Membership at the facility will cost only $55 per month, with 24-hour key card access for users. Van Moorsel expects the facility to be able to accommodate 120-130 members, which he is well on the way to reaching with 80 committed members over a month before the facility is scheduled to open.

The Maple City Squash Club, which will feature two courts, a lounge area, mens and womens change rooms, and a fitness area, was built with Van Moorsel’s own sweat, money, and passion. His love for squash, and teaching the sport to others are obvious, and soon, he hopes this enthusiasm for squash will be spreading across Chatham-Kent.

“It’s just passion, I just love it. There has got to be something you love and I love squash. I have a real passion for teaching kids, and making sure they know this option is here, and that they have a chance to play squash.”