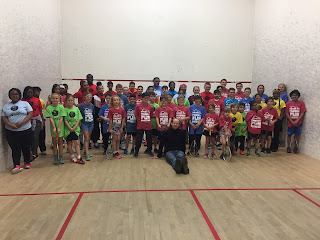 As if Windsor juniors weren't busy enough this weekend, this was also the very last stop of the Gary Waite Tour.  All season, each weekend that a Gary Waite event is on, there has been and East and a West division.  For this event, both divisions met up for the final.  Many Windsor players took part, trying to win the final event and it was a Windsor domination.
In the U10 division, both Iris Williams and Sebastien Stojanov got 2nd place, both losing a very close match in the finals.  Dawoud Pirzada, who is getting better every time he steps on the court won the consolation at only 7 years old.
In the U13 division, Olivia Bhatti also got 2nd place while Christian Lindo won the consolation.  Courtney Furmanek won the O14 consolation.   Her brother, Carter, lost in a very tough final to take 2nd place.
The beauty of the Gary Waite Tour is that it rewards participation and decides a year end winner based on their participation and performance over the course of the season.   Carter Furmanek took 1st in the O14 division, while Mehrab Pirzada took 2nd.  Jacob Bhatti took 1st in the 11-13 division and Maisie took 1st in the U10 Girls division.   Sebastian Stojanov took 1st in the Boys U10 division.  Well done for all the participants and parents that played and supported this event the course of the season.
at 10:26 PM No comments: 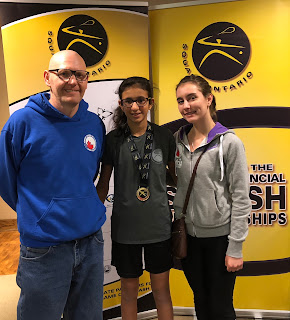 This weekend wrapped up the Ontario Gold season.  The provincial championships brought the best players to WhiteOaks for the weekend and 11 Windsor players competed in this event.  The highlight of the weekend was the Saturday night banquet in which players and parents listened to an inspirational speech by Olympic swimmer Martha McCabe.  Her dedication to her sport and dealing with failure was a great message to Ontario squash players that success cannot be achieved without perseverance, total dedication and hard work.
But the highlight of the night was Dave Morrish winning Coach of the Year.  This is an amazing honour, especially since Graeme won this same award last year.  It really speaks to the dedication of these two and the fact that they have put Windsor on the map as the place to be for squash.  Dave was recognized for his dedication to the sport and for the development of Windsor's players.  Dave had no clue that he had even been nominated.  When put on the spot to give a speech, something that Dave dreads, he came through.  He gave a very emotional speech about how after years of traveling around, he has finally found a home in Windsor and in Canada.  Dave, you did such a great job you have been nominated as official MC at all future Windsor events.  If you want to hear Dave's speech, you can find it here.
Windsor wasn't done with the honours though.  Hannah Guthrie won the girls Most Improved Player of the Year.  Hannah has shown much dedication to squash by working hard with her coaches and training on and off the court.  This resulted in numerous wins this year over players with a higher ranking.  Hannah has proven to be a tough match for whoever she gets on the court with.
As for the tournament, Ananya completed her domination of the girls U13 draw this year, by winning the U13 draw.  Ananya went through the entire season losing only a few matches.  Well done Ananya!
The other highlight of the weekend was the stellar play of Jagroop Bhangoo.  Jagroop lost his first round in a very tough match but he went on to play great in the consolation draw and eventually winning that draw.  Well done Jagroop!
All in all this has been a very successful season.  Windsor players are always tough to contend with and while they may not win their respective draws, their play and behaviour on the court leaves a lasting impression with their opponents.  As the season progresses many players who may have been dominate in their age group age out of that division and suddenly become the youngest player in their new division, playing players that may be 2 years older than them.  Congratulation to Graeme and Dave and all the players from Windsor that competed this year in the highest level of squash.  Great things still to come.
Pictures can be found here.  Draws can be found here.
at 10:53 PM No comments:

Email ThisBlogThis!Share to TwitterShare to FacebookShare to Pinterest
Labels: coach of the year, most improved, ontario open, provincial championships 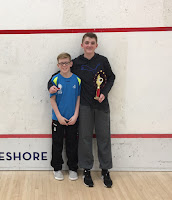 If you came by the club Friday night you might have wondered why it was so quiet.  Many adults members took part in the very popular Toledo tournament.  Some of the juniors were taking part in the Ontario Winter Games in Barrie and others were playing in the Silver tournament at Mayfair Lakeshore.  I will spare you the details of the Toledo tournament as no one advanced far in the draws and the real action at Toledo is off the court and, well, this blog might not be the place to talk about it :)

The province of Ontario is broken up into different regions (we are southwest, Windsor to London) and each region has their best player at each age level compete.  7 of here.

the 8 players were from Windsor this year.    The girls team consisted of Aparna, Ananya, Sara and Hannah, while the boys team was Vishaal, Usman, Amin and Jayden (London).  We got off to a great start by upsetting one of the Toronto teams.   Usman and Hannah pulled off upsets to contribute to the win.    The next round we dominated Ottawa.  We barely lost in the next round to another Toronto team, leaving us 2 in our pool.   We drew yet another Toronto team in the playoffs only to lose 5-3.   We then played off for the bronze medal and again lost 5-3.  However, Windsor brings home a 4th place and was very close to winning their matches.  Well played Southwest!  Complete draws can be found

3 of our players headed up to this tournament.  Dylan Charles, Mehrab Pirazzi and Gabe Van Morsel (ok, an adopted Windsor player).  Dylan was coming off his first gold and was looking to capitalize on what he learned.  He cruised through his first round only to draw the 2nd seed in the second round.  Despite losing, Dylan played him very tough and tired him out for the next round.  Luckily for Gabe, he drew the second seed next and easily defeated him.  Gabe continued his strong play and went on the win the U13 draw.  Well done Gabe!  In the end, Dylan won the bronze division.  Mehrab competed in the tough U15 division.  He played strong but lost in the quarters of the consolation division.  Draws can be found here.