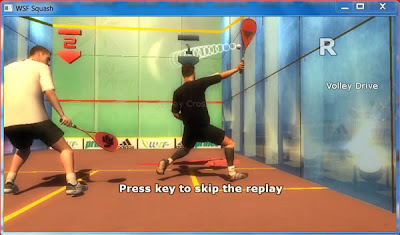 World Squash Federation Launches First 3D Simulation PC Video Game
Squash enthusiasts will now have the chance of enjoying the sport they love in the comfort of their own homes following the launch of WSF Squash, the official squash simulation video game of the World Squash Federation.
Using the most modern software and hardware, the game is a realistic representation of the sport with great tactical aspects – and all shots can be played, including drives, corkscrews, boasts and more. Players can also play online matches against each other, or play at iconic locations – and an offline tournament mode allows users the chance to organise virtual tournaments during real events.
It is easy to connect wireless controllers to the game and link to a big screen, so that squash clubs can host a virtual event. Details of this are available from the game’s dedicated website http://www.wsfsquash.com/ – where a trailer, screenshots, and more, can also be seen.
There are 12 real top squash players in the game. Users can choose between four different top tournaments at iconic locations – either selecting their favourite player or creating their own player, choosing equipment, skin colour, hair colour, posture, playing style, etc.
Following four years of development, WSF Squash will be launched at the beginning of November.
“For me, Squash is a much faster, aggressive, raw and also responsive game than, for example, tennis,” said Team6 Games CEO Ronnie Nelis. “For WSF Squash, gamers will not only need to have much faster reflexes than for any other sports game, but they will also even have to think about their strategy during the game. All this made a very good reason for us to make a game that nobody dared to make before.”
WSF President Mr N Ramachandran commented: “Our hope, of course, is that in endorsing this game we will see a significant number of newcomers to squash trying it – who may then feel that they would like to try the real thing on court, and boost grass-roots numbers as a result.”
The game can be pre-ordered with 35% discount as an introduction offer only till the 31st of October for 1st November distribution.
There are further plans to develop the game for Nintendo Wii and xBox.
at 10:20 PM No comments:

The DAC Squash Classic is February 9 -12.

Singles categories are 2.5 through to 5.5, and the three doubles events are A, B, and C. Numerous times I have been asked about adding a mixed doubles category, but alas, we simply do not have the court space to do it. And anyway, the women players from Canada have proven on more than one occasion they can hold their own!

Because entry numbers are limited and court space could not be at more of a premium, it is extremely important to take note of the following restrictions and the expected availability of all the players: 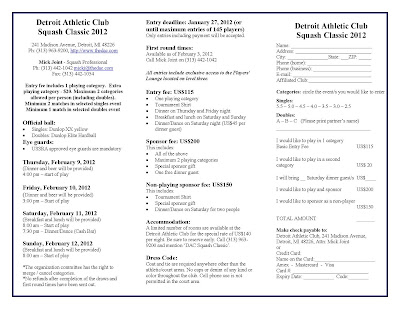 For Complete Tournament Details
http://www.thesquashjoint.blogspot.com/2011/12/all-aboard-dac-classic-express.html
at 12:54 PM No comments:

I had the great pleasure on Thursday Night to attend a great after school program that is making a difference in many inner city youths in Detroit. It's mentoring many children in the game of squash to improve their grades in schools.

Derek Aguirre the Executive Director of Racquets Up Detroit was kind enough to invited me to attend a session on Thursday. It was truly a very rewarding experience. Please watch this video and see how squash is making a difference.
at 10:22 PM 1 comment: