On Saturday evening the Woman's, Juniors, C division, 40+ Division, Mixed Doubles and B Doubles Finals were played out at the club.

Those in attendance were treated to some entertaining squash with a couple of the matches going the full distance.

I hope you had a great long weekend.

LEAGUESThere are no leagues this week.  Please double check schedules for next week and inform your opponents if you cant make it.  Please please keep remembering to cancel courts when you rearrange matches.

CLUB CHAMPIONSHIPSThis Saturday is the final of the the club championships.  I have added the times to the draws which can be found HERE.


DAVE MORRISH 50 UP BIRTHDAY BASHThis Friday is a special social event.  To help Dave celebrate his big 50th I am organizing an evening of fun squash games.  Please sign up HERE to help me plan!!   ALL WELCOME

UK RACKETBALL V CABOTO CLUB  JUNE 10THI am still looking for sign ups for the UK Racketball match V the Caboto Club on June 10th.  Matches will start at 7.30pm.  Please sign up HERE
at 10:58 AM No comments: 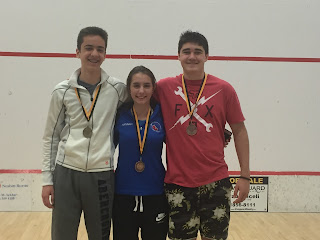 This weekend many of our juniors competed in the Ontario High School Squash Championships at Executive Squash in Vaughn.  There were 115 players competing from ten schools throughout Ontario.  The usual powerhouses were there including A.N. Meyer (Niagara) and defending champ, Lawrence Park (Toronto).  Tecumseh Vista was the 3rd largest team at 16.  It was great to see the addition of Kennedy and Massey this year.  The Massey team was started by the Khan girls and they were able to recruit enough players to field a team.   Grace Kim at Kennedy has done a great job all season getting her players out on a regular basis.   All told, the Windsor area brought 25 players to the tournament.
The tournament divisions were broken up into ranked players and unranked players. The unranked players were divided into junior/senior and male/female.  The #1 seed, Akasham Rajagopaul, was fresh of his win at the Nationals the week before so to say that the competition was tough was an understatement. 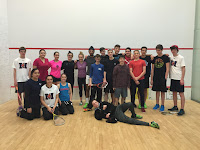 Team Kennedy quickly discovered how difficult tournament play could be, however as they played more matches throughout the tournament, all their play improved.  By the end of the weekend, Kennedy was eager to get home and practice more.  Massey was led by #1 seed in the ranked girls draw, Sara Khan, and by #2 seed in the unranked draw, Zahra Khan.  Sara dominated all the way to the finals where she was unable to put away the #2 seed.  Zahra dominated her draw all the way to the very end and won the Junior Girls Unranked division.  Well done girls!  Two big wins alone earned them enough points to be in the top half of all the teams. 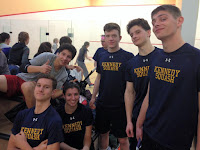 Tecumseh Vista had a mix of boys/girls, ranked/unranked and had a player in every draw.  Vista also made up 3 of the 4 ranked girls in the tournament.  Alec Cerimagic survived a couple of very tough 5-game matches to make it to the finals of the Junior Boy's Unranked final.  The final was incredibly close and saw Alec give up a 2-0 lead.  It went right down to the wire but Alec pulled it out in the end.  Well done Alec!
Vista's other winners included Hope Hengsperger (2nd) & Simone Jankuloski (3rd) in the Senior Girls Unranked division, Berto Mill (3rd) in the Boys Ranked and Hannah Guthrie (3rd)  Girls Ranked and Matt Jankuloski won the Boys Unranked Consolation.
However, in the end, Tecumseh Vista didn't earn enough points to take the title and ended up finishing 3rd.  All in all a great success for Windsor and the future looks very bright for our high school teams.  Pictures of the event can be found  here and final results can be found here.
at 3:26 PM No comments: