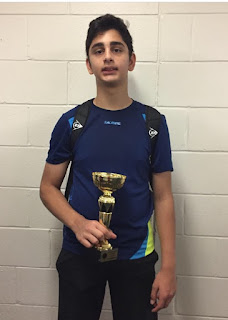 This past weekend was the start of the junior squash season with the first event being held at
Mayfair Parkway in Toronto.  The first tournament is always an interesting one with players moving divisions, some getting back from taking time off and some improving immensely over the summer.  Our juniors worked hard all summer and were looking forward to seeing if all their training would pay off.  The tourney started with the always tough boys U17 draw.  Luca Dalla Bona and Aaron Nagy both opened up with wins.  However, both drew a seeded player the next round and were relegated to the consolation draw for Saturday.  Jagroop Bhangoo put forth a valiant effort in his match but unfortunately, could not pull out a first round victory.  Amin Khan was the #1 seed in the U15 draw and he easily rolled to victory.
We had 3 girls competing in the combined U17/19 draw,  Sara Khan, Hannah Guthrie and Mackenzie Elliott.  Mackenzie played a strong first round match but could not pull off a victory.  Sara Khan was dominate in her match, easily moving into the second round.  Hannah lost her first match 12-10 in the fifth.  Ananya and Aparna Maheshwari rolled to victory in their first matches in U13 and U15 respectively while Vishaal Mehta lost against a very tough opponent.
Saturday saw a lot of squash played.  Amin continued to cruise through his draw until the semis in which he played an incredibly long 5-game match in which he pulled it out 16-14!  On to the finals for Amin.  Ananya and Aparna made it all the way to the semi's where, despite a high quality of play, neither could get into the finals.  Almost all of our players went deep into the consolation draw and managed to stay out of the bronze draw.  This is a big improvement over last season.
Sunday had many of our players still playing.  Hannah was able to avenge her first round loss by beating the same girl she lost to Friday night in the consolation finals.  Ananya and Aparna both ended up placing fourth in their respective divisions.  Amin went on to capture the U15 title in a convincing manner.   Well done to all.  Complete results can be found here.  Next tourney is Oct 13, 14, 15 in Windsor.  Come out and watch some of the action.