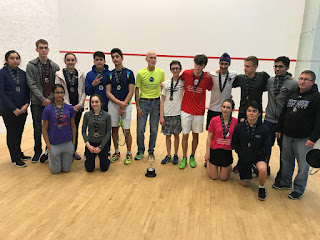 This weekend saw the last tournament of the year at Executive Squash and Fitness with the Ontario High School Championships.  130 players made up 13 different schools, most from the Toronto and Niagara area.  Windsor had 3 teams representing, Vista, Massey and Sandwich.  The format of this tournament is a true team format.  You rank your player from 1-7 and play against another school.  Number #1 from each school play, #2's and so on.  First team to win 4 matches moves on.  There are 3 divisions, ranked, semi-ranked and unranked.  Vista entered a team in the ranked and semi-ranked divisions while, Massey entered a ranked team and Sandwich entered a team in the unranked division.
This was Sandwich's first time in this tournament and even though they were missing a player on their team, they finished 4th out of 12 teams.  Vista's semi-ranked team played all their opponents very tough and lost a close match in the semis.  In the end, they finished 4th out of 13 teams.
On paper it appeared that Massey and Vista had the strongest teams and the seedings worked out as Massey and Vista ended up in the finals against one another.  Vista proved to much for Massey to handle as Vista cruised to a 5-2 victory, earning them the title as the best team in Ontario.  This marks the 2nd time that Vista has won this tournament.
It was clear at the tournament that many of the players and coaches acknowledged strength of Windsor's junior program and all players demonstrated excellent sportsmanship on the court and great citizenship off the court.
at 8:57 PM No comments: 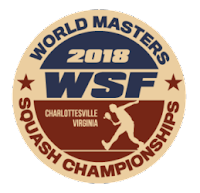 This summer the World Squash Master (see link) is coming to beautiful Charlottesville, Virginia, a short drive from Windsor.  Some members of the Windsor Squash community are planning on attending (some have even signed up already).  The events runs from Sunday, July 29- Saturday, Aug 4.   We are looking at renting a house.  If you are interested in this event, see Dave Morrish.
at 8:34 PM No comments: