What a weekend of squash!  130 people participated in the tournament including many out of town players.  The weekend started with the traditional 50/50 draw for the B division.  Entries flooded in and in the end 68 entries were collected.  That meant $340 for one lucky person.  Friday saw many tight matches and a few upsets but for the most part, all the seeds moved on.
Saturday began bright and early and staying out late Friday night didn't seem to affect most players.  I think this weekend set a tournament record for game 5s, and there were some epic matches.  Luca Dalla Bona was able to recover from a mid-match injury to force Brad Steele into a 5th game.  Game 5 remained tight the entire way.  Luca's retrieving led to long rallies and as the match neared its end, neither Brad nor Luca were interested in risky shot-making.  This led to some of the longest rallies of the weekend.  In the end, Brad Steele was able to hang on for a 13-11 win in game 5.
In the B draw, Sara Khan battled it out with Andrew Garant.  Andrew returned to the squash scene after a 2 year absence and his style of game hasn't changed.  He chased every ball down, diving all over the court.  This match had big consequences for the 50/50 draw as many people had both of these players winning it all.  However, Andrew's retrieving eventually got the best of Sara in another game 5 extra points win.
On the other side of the B draw it was the opposite styles of Dean Lansens vs. Usman Khan.  Dean is well-known for his shooting ability while Usman is well-known for his retrieving ability.  This made for a long match that came down to the final points of game 5.  At 11-10, Dean was able to hit one last winner to knock Usman into the consolation draw.  By the end of the matches on Saturday, many brackets were busted.
Sunday started early again.  However, back-to-back late nights out began to show.  Amin Khan and Dan Van Morsel battled it out in the semis of the A and Amin was determined to run Dan around.  Dan however wasn't interested in running and shot the lights out, winning 3-1.  Andrew and Dean met in the semi's with heavy 50/50 implications.  Dean ran Andrew all around the court and had him diving after many balls.  However, Andrew's retrieving got the best of Dean.  On the other side of the B draw, unknown Gabe Boldt from London defeated WSF legend Anis Khan.  This had major implications for the 50/50 draw.  Lee Bissonnette from London had 33 points and had Gabe winning.  Graeme Williams (definitely had insider info) had 33 points and Andrew winning.  Gabe let Andrew run all over the court and just played steady squash, winning 3-1 and helping Lee win $340 for the weekend.
Doubles matches were close all weekend.  But it seemed liked every doubles match on Sunday was a 5 gamer, causing the doubles court to run way behind.  Rallies were long and points were hard to come by.

The Open draw may have been the strongest Open draw we have had thanks to the Western Squash Team.  In the end it was Western #1(David Mill) vs. Western #2(Matt Henderson).  The match saw incredible retrieving ability and great shot-making.  Mill went up 2-0 and had numerous match balls but could not close out the match.  This opened the door for Henderson who won the next two games.  Game 5 was tight and no player could pull away from the other.  Henderson got hot for the last 2 points and finished the match with an impressive cross- court nick.

WSF juniors were all over the draws.  Some opted to not play in the junior draws and compete in the main rounds.  Their impact was felt throughout all the draws.  Some even showed some promise in the doubles draws.  Vishaal Mehta continues his great season with a win in this tournament.  However, the match of the draw goes to Carter Furmanek and Gavin Chamandy.  At no point were they separated by more than a couple of points.  Extra points was painful to watch as both players deserved a victory.  However, Carter was able to edge Gavin out in the end.  Watching these players rally showed just how good our juniors are. 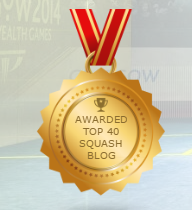 Congratulations to everyone who has contributed to Windsor Squash and Fitness blog over its many years.  The blog has been selected as one of the top 40 best squash blogs in the world by a Feedspot service that rates blogs.
at 10:48 PM No comments:

Tip of the month

ip of the month  THE GRIP  for some reason this was missing from the last email!
This month I want to talk about the grip.  I spoke about this many moons ago and just recently in my coaching and play I have gone back to basics.  For me the grip is what connects the racket to the rest of your body and you need an appropriate grip to allow your racket to become part of you rather than something that is simply stuck on the end of your hand.
The grip is what gives us control over the racket face and allows us to control the height/pace/spin and direction of the ball.  Like with anything it takes time to master but I promise if you improve the way you hold the racket you will improve the way you move, the accuracy of your shots, increase your options and also get tired less!!
Movement:  When we walk and run in a natural, relaxed way the momentum from our feet on the ground moves up the body and into the arms.  This results in a rhythmical swinging of the arms.  If you clench your fists or carry a heavy weight in your hands you reduce this arm swing due to tension in the muscles.  If your grip is relaxed then when you move around a squash court you will be able to use this momentum from the floor to help prepare your racket effortlessly and create a better al round flow.  If your grip is tight then you will dampen this momentum meaning you arm is working in isolation every time you prepare to hit.
Accuracy:  The correct grip will allow you to be more accurate in all the shots that you play as well as open up new shots into your game.  If you are holding the racket correctly your fingers will be the main contact point and this will enable more touch and feel.  You will be able to add more tension when needed as well as manipulate the racket face more when  hitting the ball.  Here is a great video explaining the grip in more detail.
THE GRIP
As always fee free to grab me around the club to go over this further.
at 11:25 AM No comments: