World's best squash players in Toronto for 2011 Ludwig Financial Recruitment Cambridge Cup TORONTO – Four players ranked in the world’s top-10 are confirmed for the $45,000 Ludwig Financial Recruitment Cambridge Cup men’s professional squash tournament set for January 31 to February 2 in Toronto.
Canadian number-one Shahier Razik of Toronto, ranked 23rd internationally, will be Canada’s entry in the eight-man field.
Joining Razik is current world number-two Ramy Ashour of Egypt, four-time world champion Amr Shabana, also of Egypt, world number-four James Wilstrop of England, 2005 world champion Thierry Lincou of France as well as top-20 Egyptians Wael El-Hindi and Hisham Ashour and their compatriot Mohamed Abbas.
‘’This is the biggest squash tournament in Toronto in the last three years,’’ said Razik. ‘This year's tournament is looking to be bigger and better. We are building on the huge success of last year’s sold-out event and have doubled the field.
" Thanks to all the clubs, pros, and sponsors that came on board this year. We will keep working towards a full scale Toronto event in future."
Eleven matches are scheduled for six venues in the city of Toronto and area: the Toronto Athletic Club, Adelaide Club, Cricket Club, Toronto Lawn and Tennis Club, Mayfair Parkway, and the Barrie Athletic Club.
For complete story: http://www.squash.ca/e/story_detail.cfm?id=3055
Squash Canada401 - 2197 Riverside DrOttawa, Ontario, K1H 7X3Tel. 613-731-7385 squash.canada@squash.ca
at 6:57 AM No comments:

Need A Place To Watch The Big Game

Watch the Game for a Good Cause 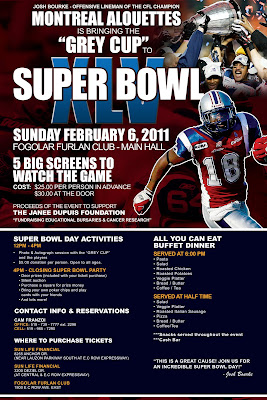 Click On Picture To Enlarge and Read Full Details
Hope To See Everyone There!!!

All professionals say "watch the ball". But, did you know that there is a certain way of watching the ball. During a rally your opponent will be either in front, behind, or parallel to you. There is only one way to watch in each of these circumstances.When your opponent is in front of you, it is easy to see where and when your opponent is going to hit the ball. The secret is to stay as close to your opponent as possible, without crowding, as he or she is striking the ball.This adds mental pressure to your opponent because by doing this your opponent knows you're ready, especially for a drop. If your opponent is in front, remember the drop is the most likely shot to be executed. And this means trouble. So get close to your opponent when he or she is in front of you.When your opponent is next to you or behind you, try not to look directly at the ball. Use your peripheral vision. The reason to do this is that it may be physically impossible to follow a fast crosscourt and turn your head at the same time. Use your eyeballs instead of your head and neck. A good reference point is the serve line that runs across the floor of the court. Follow the ball with your eye to this line and then lock your eye at the serve line area and let your peripheral vision track the ball to your opponent's racquet.The only exception is if you've hit a high length shot that comes off high on theback wall. In this instance you need to watch your opponent closely. Just make sure you're watching from the front while on the "T".
at 9:21 AM No comments: