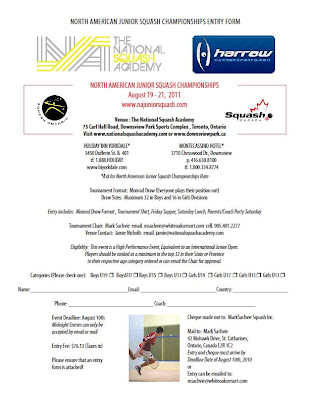 Click On Picture to Enlarge
“Nothing happens unless first a dream”. Four years ago the North American Junior Squash Championship moved from a dream to a reality and this event has continued to grow and gain in stature internationally. Harrow Sports is once again the major sponsor and over the last four years have supported the event in a big way.

The 2011 event is being played at Toronto’s new National Squash Academy – again, the result of a dream – Jonathon Power, Gary Waite and Jamie Nicolls dream. The new squash centre houses 10 courts with two all glass courts.

The mandate of the Championship is to bring high performance athletes from all over the world and provide them with an unbelievable competitive opportunity. The tournament will use the Monrad draw format which gives all entrants plenty of matches. Entires are limited to 32 in the boys’ event and 16 in the girls’ division.

The event will help prepare high performance squash athletes for the upcoming season and will international high performance players the opportunity to visit Toronto, Canada and play in one of North American’s premier junior squash events.

Leading up to the event is the Jonathon Power 2 week elite camp. The camp is a great way to prepare for the event and the coaching staff that the camp provides is second to none.
at 8:46 AM No comments:

Why Do You Love Squash?

I came across this video the other day and thought you might find it interesting why people love Squash. Please Comment Why You Love Squash.
at 8:12 AM No comments:

Check Out This Article from today's Globe and Mail. It's a very interesting article about one girl's fight to play squash without repression from the Taliban. Definitely worth reading.

http://www.theglobeandmail.com/sports/more-sports/pakistani-womens-prospect-taken-under-legends-wing/article2020358/
at 12:43 PM No comments:

Tom Porter, Mark Porter, Brian Porter, Jonathon Power, Mike Wilbur, David Guthrie
Mike “TMS” Wilbur in Men’s 50+ finally broke though and won his first match against Don Givelos of Toronto. Mike got off to a fast start by taking the first game and continued to play strong throughout the match. Mike won the match 3 games to 1 and plays today at 10:40am in the Bronze Final.

Brian Porter in Men’s B Draw Silver Semi Finals played Byron Goodwin of Burlington. Brian ran into a tough competitor in Goodwin. Brian played hard but did not have enough gas. Goodwin won the match 3 games to 0. 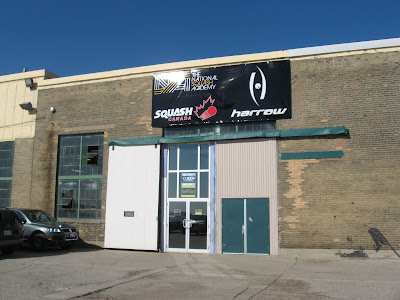 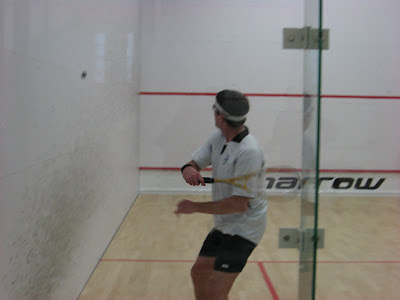 Mike Wilbur in 1st Round Action in Men's 50+ 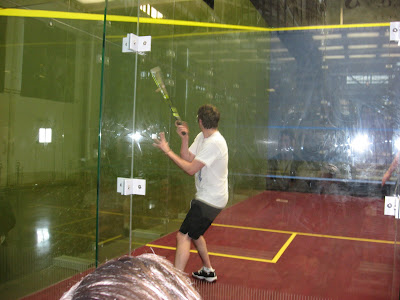 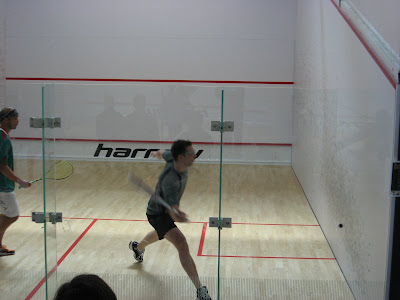 Brian Porter in 2nd Round Action Men's B Silver Draw
Tom Porter in the Men’s 55+ won his 1st round match against Kevin Arnsdorf of Toronto by the score of 3 -1 in games. In the 2nd Round Tom lost to the #5 seed Rashid Aziz from Vancouver 3 -1 in games. Tom plays again today at 12:10pm in the Silver Draw.

Mike “TMS” Wilbur in the Men’s 50+ division played Alex Smith of Toronto and lost 3 –1 in games. In Silver Draw Mike lost to Chris Cameron of Barrie 3 -1 in games. Mike play again today at 1:30pm in the Bronze Draw. Mike says his game is off because he was not allowed to wear his muscle shirt in this event.

Check Back Tomorrow for more results or click on link for real time updates. http://www.squash.ca/canadianchampionships/2011/draws/index.htm

The 2011 Harrow Canadian Squash Championships Starts Tommorrow Wednesday May 4/11 in Toronto. Windsor Squash And Fitness Club has 5 of it's players playing in this year's event. Tom Porter (55+ Draw), Brian Porter(B Draw), Mark Porter (A Draw), Mike Wilbur(50+ Draw) and David Guthrie (C Draw) will all be competing. Please Check back daily as I will be updating their progress and posting photos from the tournament. Good Luck Guys
at 8:09 AM No comments: