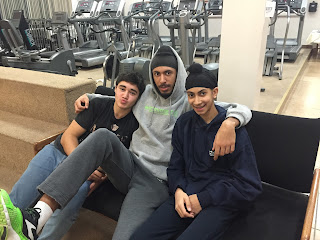 This weekend, 14 of Windsor’s juniors headed up to Vaughn to participate in the Ontario Junior Closed tournament.  Overall, 130 juniors from across Ontario came to compete and attempt to become provincial champion.  The competition was very tough but our juniors held their ground.

Luca Dalla Bona, Aaron Nagy, Amin Khan, Sara Khan, Ananya Maheshwari, Aparna Maheshwari, Berto Mill and David Mill all won their first round matches.  This was a big turning event for some of these players as this was the first time they have been able stay in the main round of a Gold event.  However, that also meant even tougher competition in the next round.  Only Amin and Ananya were able to move on past the first round.
Saturday was a tough day for most of our juniors, as many of them were knocked out.  Come Sunday only Ananya, Amin, Sara, Usman, Hannah, and David still had matches to play. 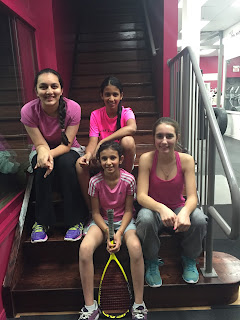 Ananya cruised to another tournament win, barely losing any points.  Well done Ananya!  Despite having match ball in the ¾ match, Amin could not hang on in a very close and exciting match.  Sara Khan lost in the semis of the consolation and Usman lost in the consolation finals.  Aparna won the consolation of her draw and Hannah cruised to a Bronze division victory and David won the ¾ match.
Overall, there was definitely an improvement in our play.  Each tournament our juniors are getting closer to winning against the rest of the province and everyone is noticing.  Windsor usually brings the biggest contingent to any of these tournaments and people notice how much our players are improving and supporting each other.
On a side note, many of our parents were approached by people that came down to our tournament (October, Gold #2) and they all commented on how it is the best tournament on the calendar and it is becoming a “must attend” part of the squash season.  The other positive thing that everyone experienced was how friendly people were when they were out in the community.  Well done Windsor!


Final results can be found here and pictures here.
at 7:29 PM No comments: 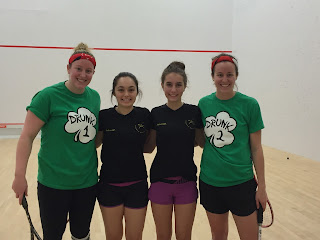 102 players entered the first big tournament weekend of the year.  Very few were left standing on Sunday afternoon.  Literally.   Whether it was the many squash games or the after-squash outings, the weekend was a tiring one.  Play started Friday with many of our younger juniors gaining their first tournament experience and shortly after saw the first rounds of the adult draws get underway.  I use "adult" loosely because no matter what draw you were in, it seemed it was full of our juniors.  In Open draw, Micaala Seth upset (?) (or beat up) Brad Hanebury to advance in the main round.  Many of the favourites advanced through the other rounds.
Play began early on Saturday with matches becoming tougher.  Junior Mackenzie Elliott raised many eyebrows with her play in the C Draw.  However, the big thing that was was noticed was the recurrence of Khan vs. Bradd.  The Bradds from Sarnia descended on Windsor with their entire family and it seemed like they were in every draw and it seemed like they were playing a Khan every time you turned around.  However, the news of the day was all the close double matches.  At one stretch there were 5, 5-gamers in a row.  Because of this, the doubles matches became very backed up and matches continued until midnight on Saturday.
On Sunday the draws were finally widdled down to the finals.  In the Open final, Steve Poirier of London couldn't slow David Mill down, allowing David to take it 3-0.  The A Final had two of the bigger tournament players trying to share court space as Paul Gabrael and Robert Stevens of London looked to take the A title.  The match lived up to everything it promised with long rallies and great shot-making.  Unfortunately for Windsor, Gabreal went down in a very close game 5.
The B Final was a story of two different games.  Deidre Bradd played a high pressure game against the soft hands and retrieving of Ryan Guthrie.   However, in the end, Guthrie couldn't match the pace of Bradd's shots.   Another loss for Windsor.
The semi-finals of the C draw saw Usman Khan upset his older cousin, Sara Khan.  Usman entered the finals playing the best squash of his career and exuding confidence.  However, he met up Betsy Carson, a very steady and methodical player who refused to play Usman's game.  Usman lost in 3 games.
The 40+ final was like a scene from Groundhog Day.  David Guthrie and Al Valente play each other very often and know each other's game inside out.  However, Valente could not match David's shot-making today as David eased to his second 40+ victory.
In the juniors event, Rajan Sandhu got his monies worth as he also ended up filling in in the C draw.  This experience must have helped him as he took the junior title of Zara Khan.
The usual suspects dominated the doubles again this tournament.  Eugeni/Hanebury were barely pushed on their path to the championship.  Local favourites, Caille/Houbtchev won the B doubles. Out of towners, Etheridge/Bissonette won the C doubles over Hewer/Shaw.  Holman/Corchis easily won the women's draw and Seth/Stevens took the Mixed title.
Possibly the biggest winner of the weekend was Dan Barisic as Dan won the C Draw Bracket Challenge.  Dan walked away with $200 and the juniors added $200 to their fund.  Final results can be found here.  You can find complete brackets here.  If you want to continue the squash fun, Nov 21-23 is the Simon Warder Tournament.  This is a very fun tournament and supports a great cause.
at 7:13 PM No comments: