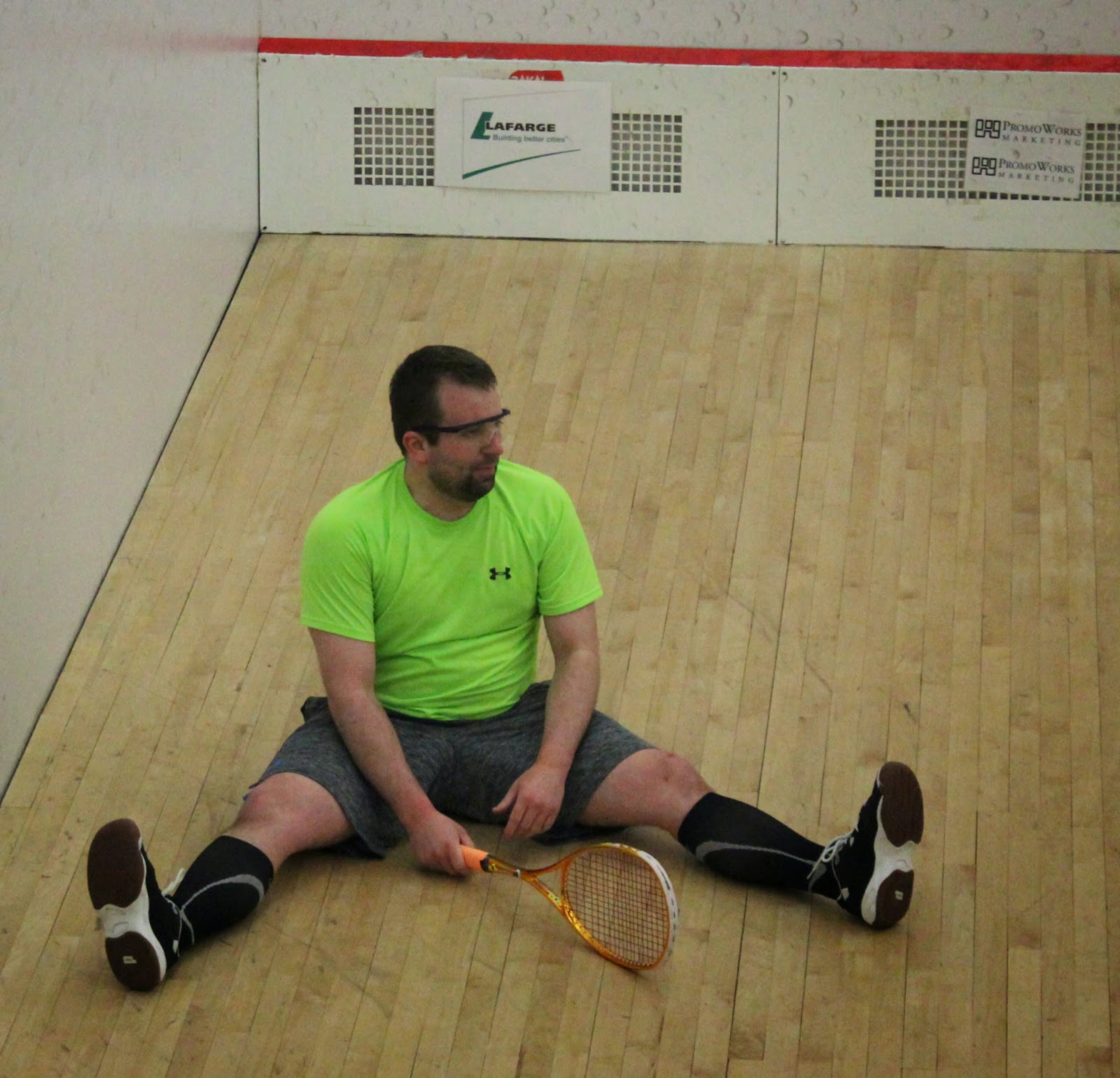 There was a definite sense of tiredness at the tournament today.  Yesterday took a lot out of people and with many going out on the town last night, there were many tired bodies at the club today.  However, in the end that didn't stop some great squash from being played.  In the Open draw, Mick Joint took down Mark Eugeni.  Mick was on fire, rarely missing shots and continuing to keep Mark on the run.  The A draw final was an old vs young final (sorry Dan) with Ryan Leslie vs. Dan VanMorsel.  Dan continued his deft shot-making and Ryan just couldn't match Dan's touch.
The B final between Jan Potsmesil and John Leslie was the most highly anticipated match of the day.  Not so much because of the high quality of squash (which it was) but more for who was going to win.  There was big dollars on the line.  In our first ever bracket challenge, the bracket finals came down to Rob Kubic and Ryan Leslie.  Rob had the unknown Potsmesil winning it all and Ryan kept it in the family and going with his dad.  Despite a strong showing from Leslie, Potsmesil just looked to fresh for Leslie.  Which meant that Rob was $120 richer.  Here are the complete standings.
The C final saw Kevin Donde vs. Jeff Hartling with Donde pulling it out in a hard fought match.  The D final may have been the loudest final of the day.  Two of Windsor's juniors, Hannah Guthrie and Jagroop Bhangoo met for what seems like the millionth time and every time it is very tight.  Cheering sections attempted to outcheer each other as Hannah and Jagroop battled right down to the final points.  Hannah snuck out the victory.
The Women's 40+ saw Joyce Bennett continue her strong play with a win over Mary Pat Scarfone.  In the junior draw, the rapidly improving Vishaal Mehta emerged the victor.  The A Doubles was a great 5 game match between Hanebury/Boden vs. Eugeni/Uffleman.  Many great rallies ensued during this match but it was perennial local favourites Eugeni/Uffleman winning in the fifth.  We just won't tell the London duo that Jon was playing with a new titanium knee.
The Women's Doubles draw was dominated by the Windsor duo of Janice Funkenhauser and Renka Gesing.  In the finals they defeated a pair from London.  In the Mixed Doubles, the Windsor-dominate team of Beneteau/Beneteau went up against a pair of newcomers from Sarnia, Seth/Bradd.  In yet another 5 game match, the Sarnia duo pulled out a great victory.  The Beneteau/Beneteau team wasn't done.  They also took the B doubles brackets.  Well done!
Overall, this was a great weekend with 132 competitors from London, Sarnia, Toronto, Guelph, Waterloo, Chatham, US and I am sure some other places I didn't know about.  Complete results can be found here.  Everyone I spoke with talked highly of the club, the camaraderie, Windsor and how much fun they had.  Here is a link to all the pictures from the weekend.
at 2:23 PM No comments:

This was a busy squash weekend with the TTC in Windsor and the Ontario Junior Open Championships at White Oaks in Niagara.  Congratulations to Ananya Maheshwari who won the U11 draw, Stefan Houbtchev who finished 4th in the U19, and Amin Khan who finished third in the U13!  Well done Windsor.
at 9:25 PM No comments:

Email ThisBlogThis!Share to TwitterShare to FacebookShare to Pinterest
Labels: juniors 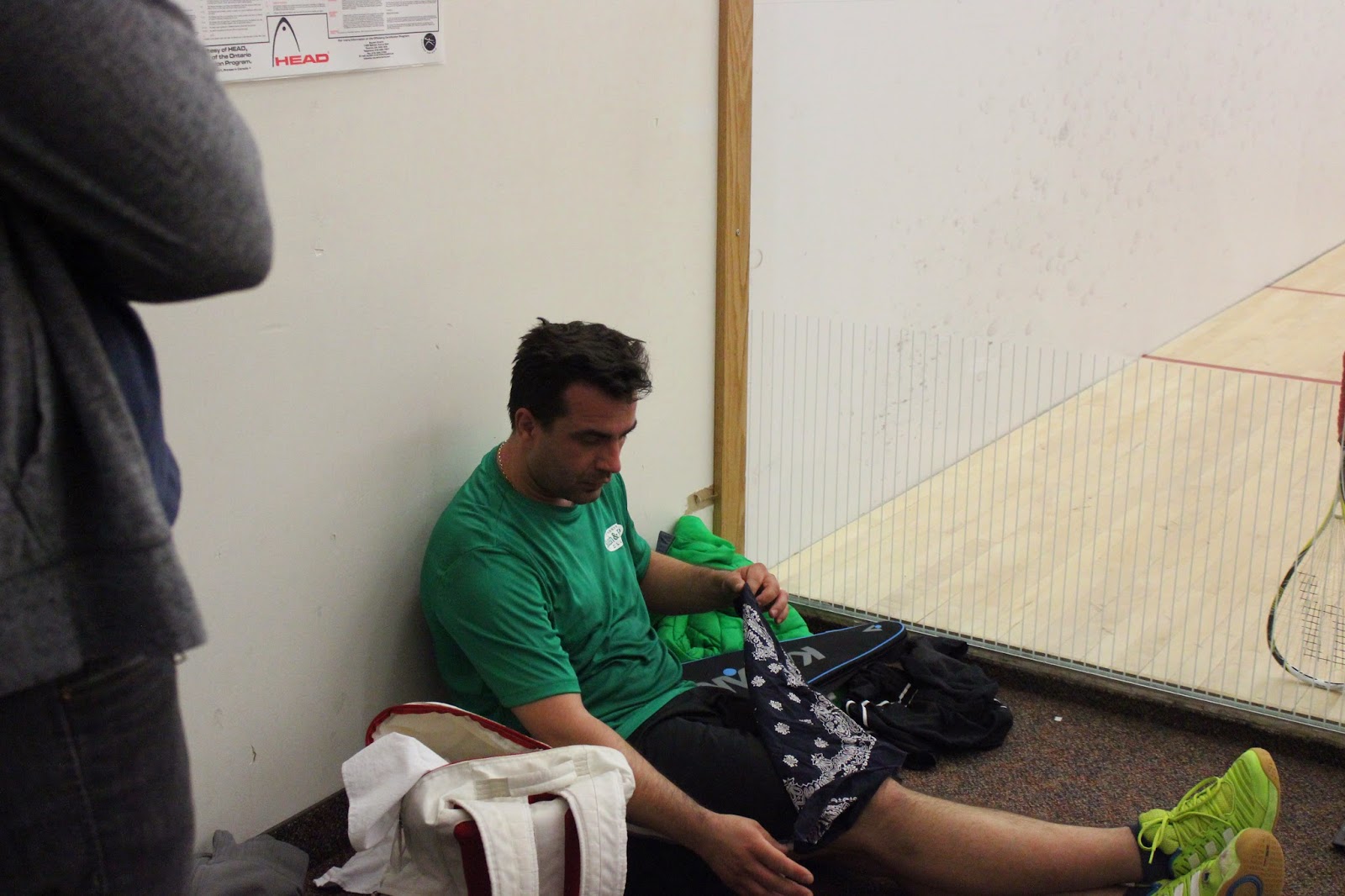 The second day of the TTC saw a ton of squash matches played.   The big news is that pretty much everyone's bracket is busted (unless you are from Chatham).  The B draw saw many surprises with John Leslie (Ohio), Steve Mitchell (Chatham), Jan Potmesil (Toronto), and Chris Chamandy making it through to the semis.  The Open draw got under way with Graeme, Mick, Mark E, and Mark P moving through to the semis.  The semis provided quite a bit of excitement with Mark upsetting Graeme in a see-saw battle that saw age win over beauty.  Mick also advanced with a win over Mark Porter.
The A draw saw Gabreal upset by Ryan Leslie (Ohio).  Also advancing to the semis were Berto Mill, Dan VanMorsel, and Seth Rogers.  Berto put up quite a fight but couldn't hold off Ryan.  Dan was just too steady to allow Seth to get into any kind of routine.  Ryan vs. Dan in the finals.
The C draw saw Kevin Donde, Jeff Hartley, Maxi Bistrev, James Konrad advance to the semi finals.  I am not sure how much gas James Konrad has left in the tank after his gruelling 5 game match with Luca Dalla Bona.
The bottom half of the D draw had WSF junior Jagroop Bhangoo going through to the finals untouched while in the other half, fellow junior Hannah Guthrie had her hands full with a hard-hitting Colin Bateman.  After going down 2-0, Hannah clawed back to take it in five.  It will be a WSF junior final in that division.
Today was an incredibly long day of squash yet many of the participants chose to head to Rockhead for the Saturday night festivities.  We'll see what the morning look like.....
at 11:59 PM No comments:


What a great start to the tournament.  100 competitors battling it out in Open, A, B, C, D, Women's 40+, Doubles A, B, Mixed and Women's.  A fun twist to this year's tournament has been the bracket challenge in the very full B draw.  47 people entered in hopes that their picks would take home half the purse ($117).  You can find the live updated scoring here.
Many great matches took place tonight but some of the more entertaining matches that took place where in the B draw.  Young upstart tennis player, Adrian Mag, took on former Windsor-turned Toronto squash player Paula Kuzic.  The match was tight all the way with Mag diving all over the court but it was veteran experience that sent Paula through to the next round.
In another entertaining match saw Windsor junior take on Lisa Bogden from London.  Nagy was the overwhelming favourite and many bracket challenges and he may have felt the pressure.  Bogden played consistent with a lot of retrieving and steady drives.  As the match closed on Nagy, it also closed on many people's brackets. 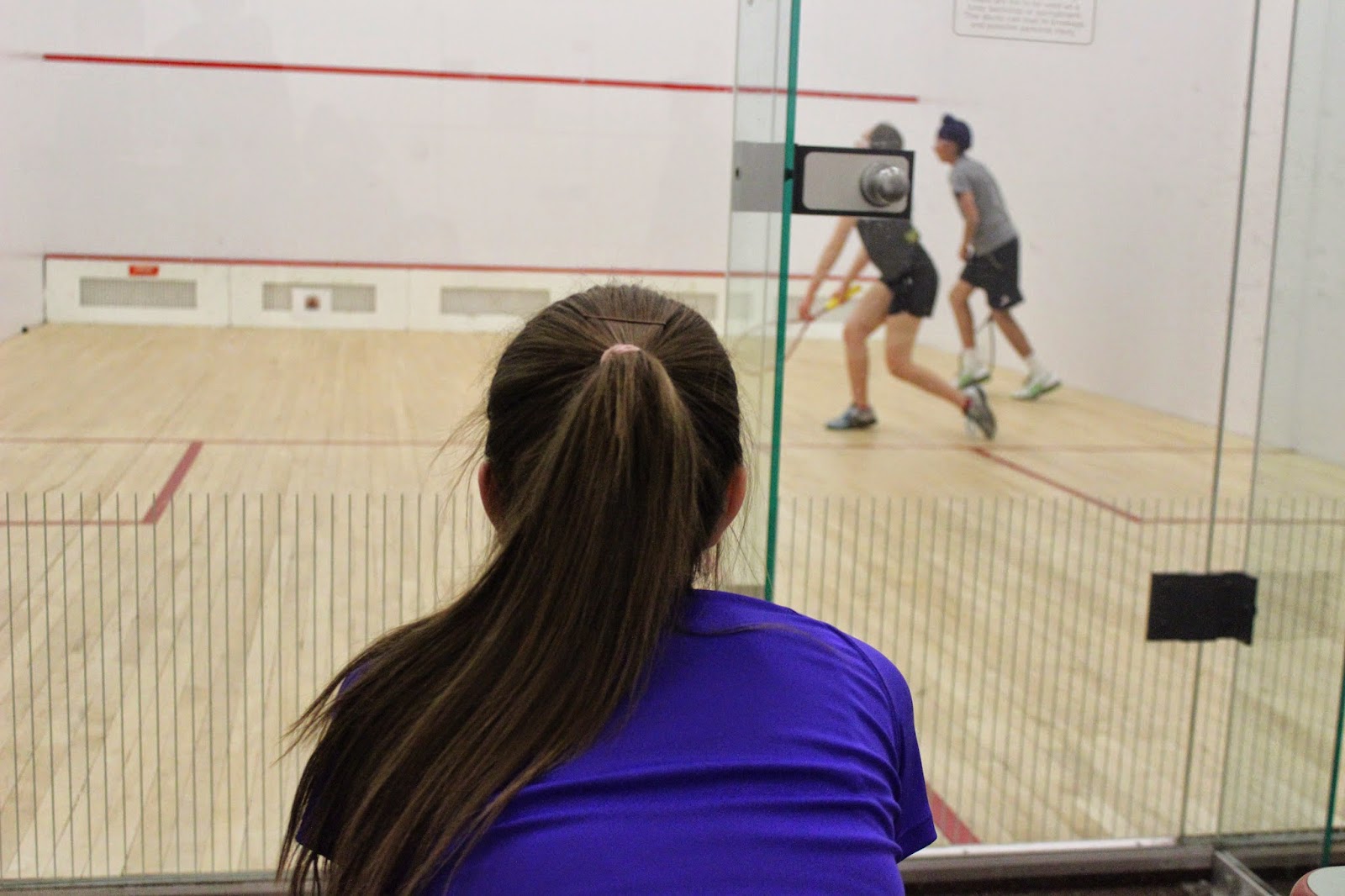 And what would a tournament be without the classic Phil Dimitrov vs. Luca Dalla Bona match.  Dimitrov has been dominating this matchup of late but Dalla Bona proved to be too much tonight with an impressive 3-0 win.
at 9:07 AM No comments:

Another long season of the Gary Waite Tour came to a close Sunday in London.  Despite it being
March Break, many juniors came from all across Southwestern Ontario.  Windsor was once again well-represented.  In the over-14 division, Aaron Nagy and Niki Bistrev battled it out again.  After many long rallies and great shot-making, Bistrev just couldn't overcome Nagy's consistency.  In the under 14 division, it came down to Luca Dalla Bona and Hannah Guthrie.  This match went down to the wire with Luca pulling it out.  A shout out to the person that tried to influence the match by turning off the lights.  :)
Since it was the final stop, that meant season-end awards.  Points are awarded for performance and participation over the season.

Over the course of the season Windsor dominated this event, not only in squash but in attendance.  Many of these players will have graduated from this tour and it is time for the next wave of Windsor talent. 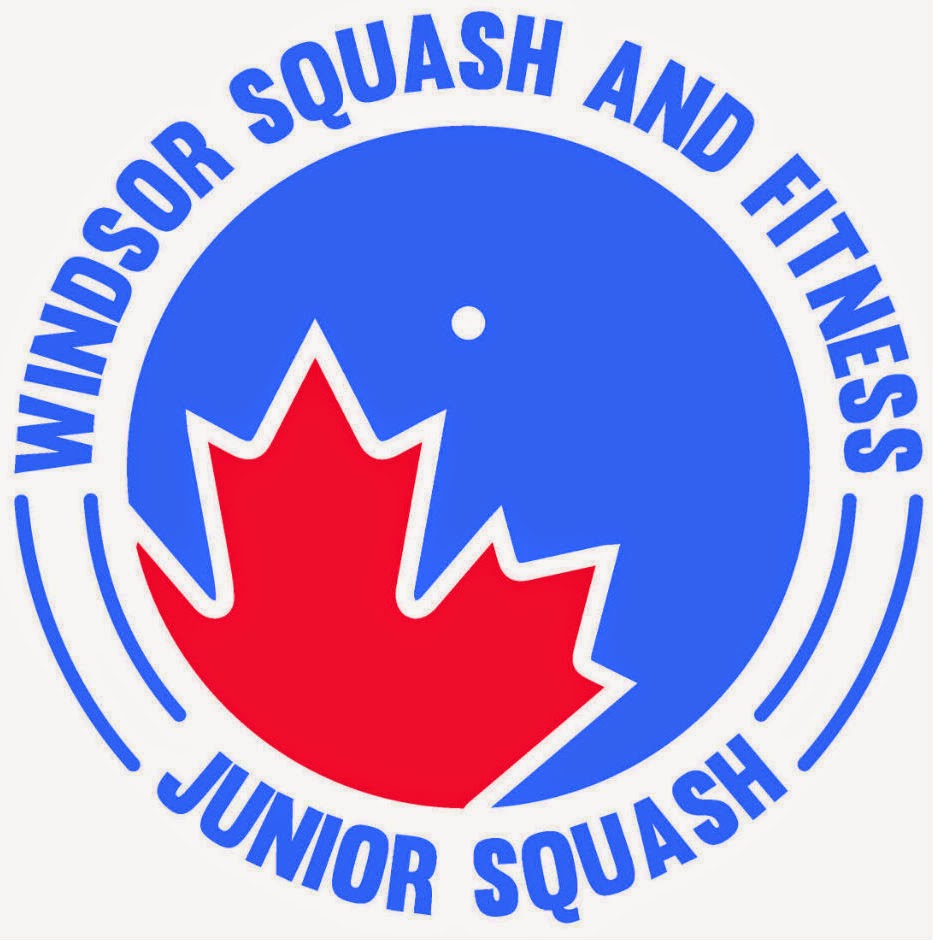 This weekend 8 of our juniors (plus Graeme and Craig) from the Southwestern Ontario region headed up to Ottawa to participate in the Ontario Junior Provincial Championships.

For much of our team, this was their first time competing in a team tournament.  After a long day of travel on Friday, we hopped right off the train and onto the courts.  The first part of the tournament consists of round robin play.  We were in Pool B against Niagara, Eastern Ontario and Ottawa.  Unfortunately, our first round was against Niagara, always one of the strongest teams.  We got off to a great start with Aparna winning the first match.  However, we didn't get another win until David Mill and ended up losing 6-2. 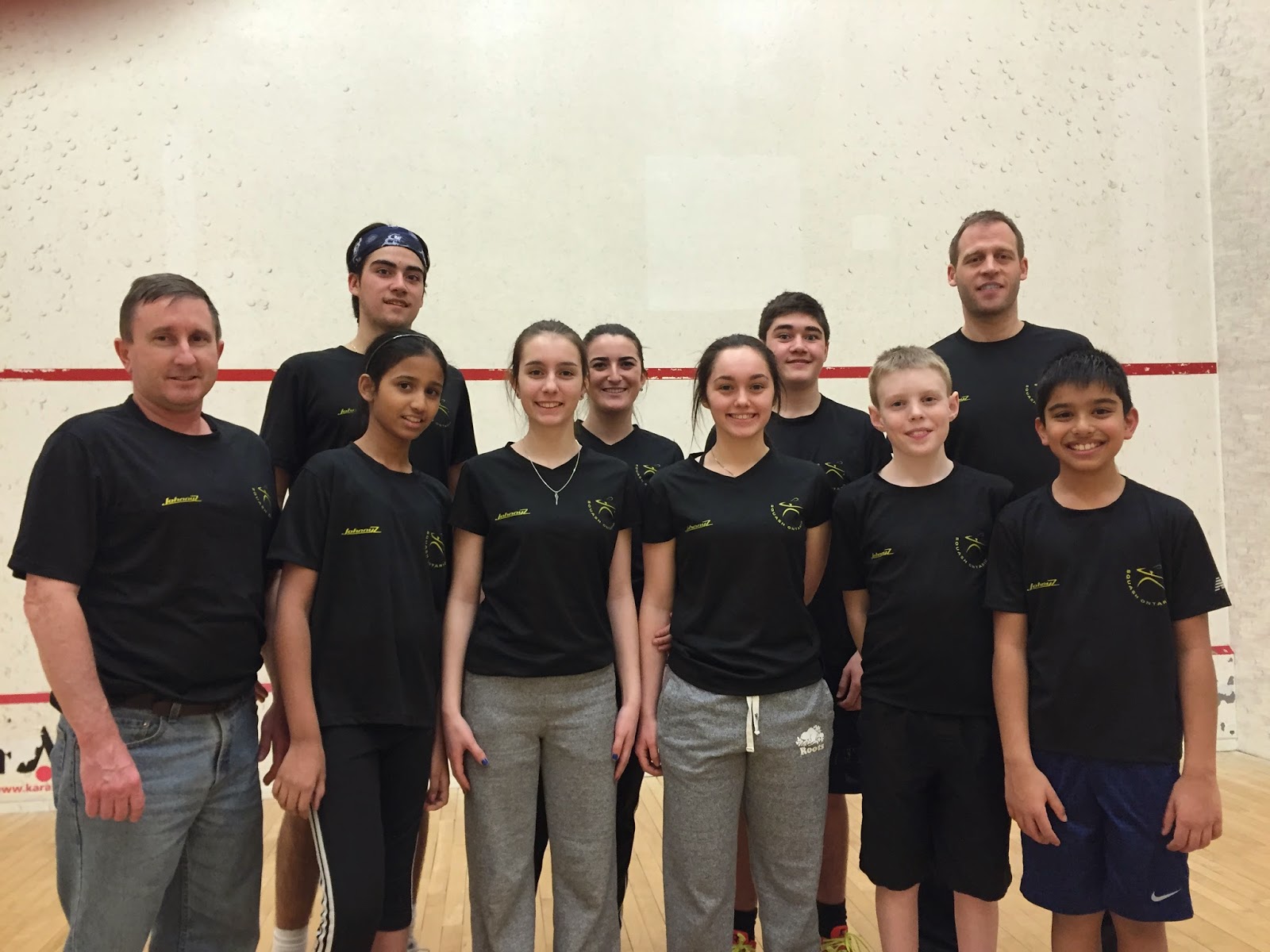 Now that first round nerves were out of the way, we played Eastern Ontario.  In this round we played very well with Vishaal, Aparna, Mackenzie, Riley, Berto and David all pulling out victories.  Vishaal had a great comeback after going down 2-0 to his opponent.  Vishaal played steady, mistake free squash to win it in 5.  Mackenzie played possibly her best tournament match ever, winning 3-0.  Southwest 6-2.
We had to beat our next round opponent (Ottawa) to advance to the main round.  While all the matches were very close, we couldn't seem to pull out the close games nor the game fives when we needed.  We ended up losing 6-2 and headed off to the consolation round.
Our first opponent was Eastern Ontario again.  We didn't have the same kind of success as the first time we played them.  However, we pulled out a 5-3 win to end Saturday and leave us with a showdown with Western Ontario for 5th place.
With so many players (and coaches) in Ottawa for the first time, we couldn't pass up the opportunity to get out and experience an Ottawa winter night.  Our team joined the other teams and all the players went skating on the Rideau Canal.  After 2 hours of skating we then visited the Tomb of the Unknown Soldier and Parliament Hill. 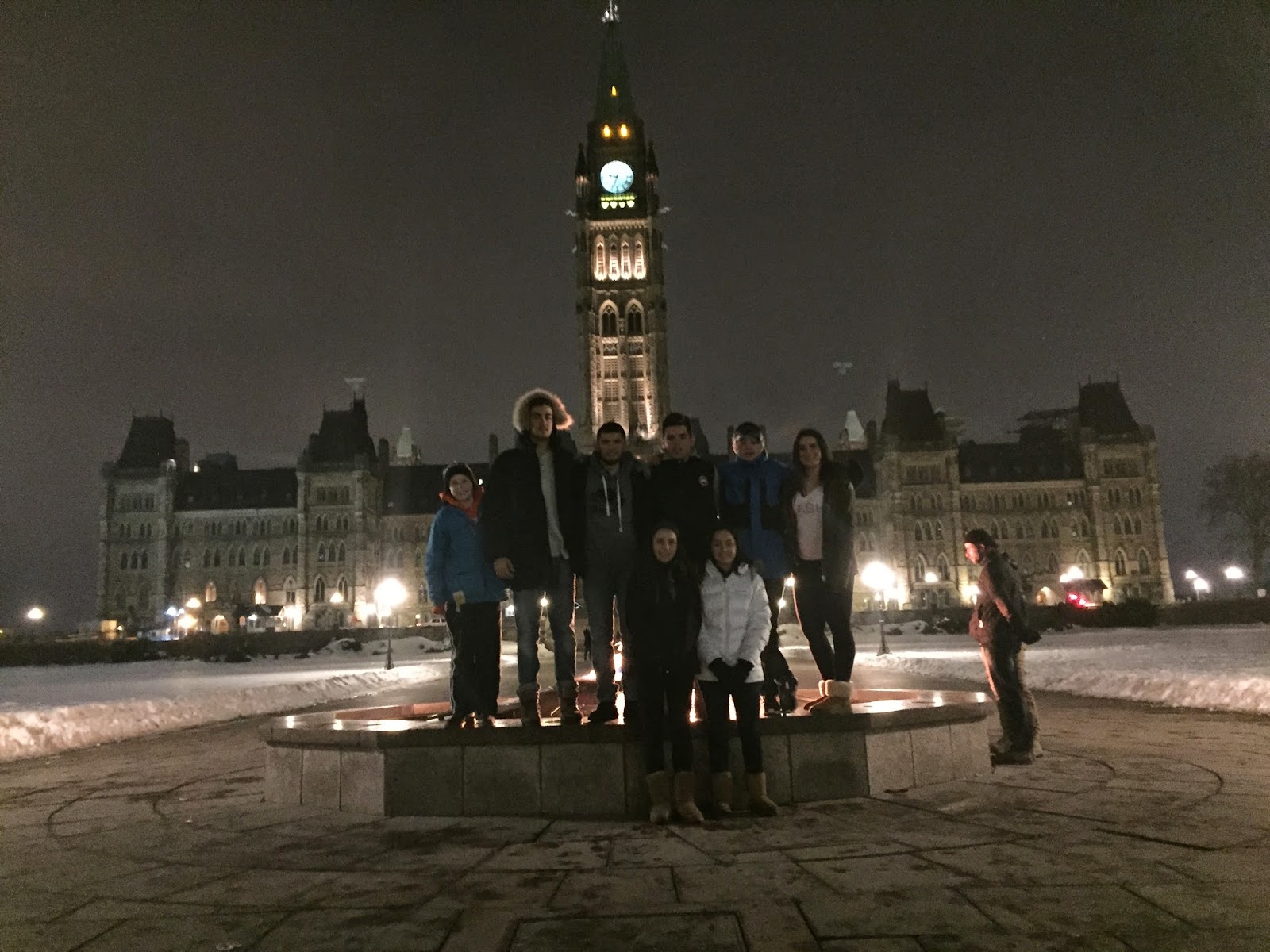 Sunday morning saw many tired players, coaches and parent chaperones at the breakfast table.  Our opponent for 5th place was Western Ontario (Barrie).  While we played very well, we lost a couple of close ones and Western defeated us 5-3.
Our players represented us in a very positive manner.  They showed exemplary behaviour on and off the court.  Many spectators commented on their ability and their positiveness (I know, not a word) on the court.
Aparna played great and was in many tight matches and provided us with much needed wins.  Mackenzie is quickly gaining experience in the provincial scene and her game improved as the weekend went on.  She also had her first win in a provincial tournament.  Hope is a newcomer to the squash scene but is getting better very quickly.  Not only was this her first tournament but only her second match ever.  She played every opponent tough and never gave up.  Hannah played out of her age division in the U19.  Due to the lack of female players we had to make strategic decision as to who was playing where.  Hannah was in every game and held her own in each match however, sheer age difference was too much to overcome.
Vishaal played some great matches, coming back from a 2-0 deficit and provided the team with some much needed wins.  Riley is the one non-Windsor resident (Sarnia).  Riley played great and his steady demeanour on court was amazing to watch.  Berto was his usual entertaining self.  Berto literally left his blood and sweat on each court he played and those that watched couldn't help but be inspired by his effort.  David (our team captain) won all his matches and more importantly was there to support and help the rest of the team in their matches.
The team would like to thank John Zuliani, Teresa Ashworth, the Gary Waite Tour, and Squash Ontario for their sponsorship.  We couldn't have done it without you.  Below is a link to the pictures of the trip.