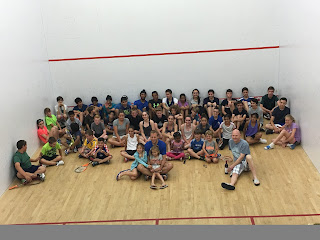 Saturday was the last day of junior sessions for the year.  Most definitely it marks the end of the most successful year of squash for Graeme and Dave and the juniors.  We had a record number of players competing at the Gold level this season.  Ananya won National Championships, many others left their mark on many tournaments and Graeme won Coach of the Year.  Next year we will be even better and more dominant in the province with the addition of David Morrish this year.
As per a tradition that Graeme started, on the last session of the year, the older players planned an afternoon of fun for the younger players.  All the juniors that showed up on Saturday were treated to fun games all afternoon.  However, the final session wouldn't be complete without the end of season awards.  The focus is always on effort and the players that won an award demonstrated consistent effort every time they stepped on the court.  Congratulations to the following:

Male/ Female Player of the Year 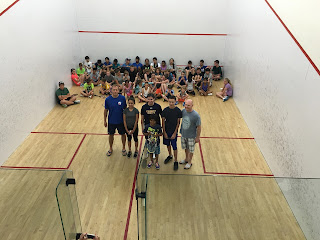 Last Friday June 17, Squash Ontario held its annual general meeting which celebrated the last 12 months of squash in the province.  Windsor Squash was a big part of these celebrations.
I(Dave) was the keynote speaker and his topic was "Junior Squash @ Windsor Squash".  I spoke about how the junior program has grown from 5 players in May 2012 to just under 100 in April 2016. Graeme and I put a video together to show some of the activities that could be done in a school.   That video can be seen here.  I also spoke about the Active Schools program and how it is used to recruit players.  The presentation was very well received.
Windsor Squash was recognized in the awards ceremony as a club that is a huge supporter of junior squash. Mark Porter received this on behalf if the club.
The biggest award of the day went to Windsor's Head Pro, Graeme Williams as "Coach Of The Year'. He received a record number of votes. This was largely in recognition of the amazing junior program which he has built over the last 4 years as well as his coaching the Women's national team.


Sadly things only went downhill after that as I attempted to play golf!

David Morrish
at 2:32 PM No comments:

Below is the link for the schedule.  Last night saw Holman, Guthrie (Craig), and Roth all climb while Guthrie (Dave), Nagy and Deane went in the other direction!


Doubles Scheule
at 1:40 PM No comments: