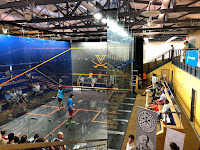 Everyone had a "rest" day (it is masters squash) except for Dave.  Dave was up bright and early ready for the match.  Yes, our apartment reeked of Tiger Balm.  When he hit the court there was a bounce to his step.  As the match progressed, Dave floated around the court and hit deceptive shots that kept his opponent on his heels.  Dave cruised to a 3-0 victory and gave Windsor its first win.  Everyone is back on court Tuesday.

This was looking to be a long day was each one of us were scheduled to play an hour apart from one another.  First up was Jay. In game 1, Jay had some trouble adjusting to his Irish opponents shot-making and lost game one.  In game 2 Jay adjusted and began to move his opponent around the court and almost took game 2.  In the end Jay went down in 3 and moved on the Plate 2 round later in the day.
Next up was Al.  He drew a hard-hitting lefty from Australia.  Al struggled to find any momentum in this match.  His opponent kept him off-balance with his kills and deadly serve.  By the time Al figured out his opponents game the match was over, relegating Al to the Plate 2 also.
Next on the schedule was Craig.  Craig drew a former professional hardball player and a member of the McArthur Squash Club(check it out).  Craig jumped out to a 2-0 lead by playing steady and keeping his opponent under pressure.  Despite a little blip in game 4, he held on for his first World Masters win and advanced to the round of 16 in the consolation draw.  More importantly, it meant he didn't have to play again that day giving him some valuable rest. 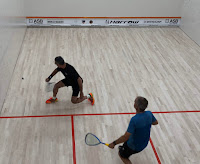 Dave was looking to continue his hot play from yesterday and he did just that.  He continued with that bounce in his game and once again relied on keeping his opponent on his heels with his deception.  Dave cruised to a 3-0 win to move to the round of 16.  Unfortunately Dave has now come up against the #1 seed, one of the top 50+ players in the world and an old training partner of Dave's.
Jay was then up with his second match of the day and was starting to feel the effects of the tournament.  Jay was up against a crafty Irishmen that could shoot from anywhere on the court but struggled to get around the court.  Jay moved him around and hit many winners but the Irishmen kept just hanging around and Jay just couldn't put him away marking the end of Jay's tournament.  One of the most amazing thing about Jay this week is that this was his first tournament ever!  Way to start big Jay!
Al was still searching for his first win of the tournament and not rely on Craig and Dave to supply all of Windsor's wins.  Al finally got his game going with lots of boasts and good length and easily won 3-0. For the first time ever, the World Squash Masters is taking place on North American soil.  This tournament takes place every 2 years and is open to anyone who is 35 years or older.  This is the Olympics for squash players who continue to play competitively.  The draws are full of former top PSA players and even some still playing on the PSA tour.  This year's event saw over 800 players enter from 59 different nations, including 52 from Canada.
Of those from Canada, 4 Windsor Squash players made the 10 hour drive to Charlottesville, Virginia.  Craig Guthrie(45+), Dave Morrish(50+), Jay Patel(55+) and Al Valente(55+) are all representing WSF in their respective age divisions.  Unfortunately, this was the best representation Windsor could get. 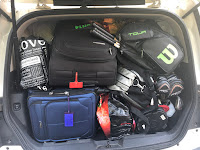 As you can imagine, the draws in this tournament are huge.  The 45+ draw has 101 players in it, while the 50+ had 90 and the 55+ had 119.  So for Al to win the tournament he will have to play 5 matches (not to mention beat 5 former top 20 PSA players and Canada's national champ from this year).  But it is not about winning, it is about competing and trying your best, right?
First up in the first round matches were Jay Patel and Craig Guthrie.  Jay chose the right tournament to make his debut and he started in spectacular fashion.  At times, Jay seemed to be easily controlling this match.  However, his opponent continued to fight back and pushed Jay into game 5.  Jay had 3 match balls but was unable to close out his pesky opponent, losing 15-13.
Craig's first opponent was a veteran of the tournament circuit and started out hitting soft volleys and hard kills.  While Craig stayed in the rallies, he wasn't able to take a game off of his opponent.
Next up was Al.  Al was playing a hard-hitting leftie from the British Virgin Islands.  Al got off to a slow start and had some difficulty adjusting to the pace of the court.  After going down 2 games, Al decided to turn it on (yes, boast) and ran out to a quick lead.  However, in the end he wasn't able to take advantage of his lead and lost in 3.
Next up, Dave Morrish tomorrow!