This past weekend Graeme and I (Craig) traveled to Sarnia to compete in the Simon Warder Memorial Prostate Cancer Squash Tournament.  This tournament had one of the strongest A draws of any tournament I have seen in a while.  Micaala Seth's family entered and they really dominated all the draws.  All participants were guaranteed three matches which made for a lot of quality squash.  The highlight of the weekend was the very entertaining party on Saturday that left several squash players a little worse for wear the next morning. 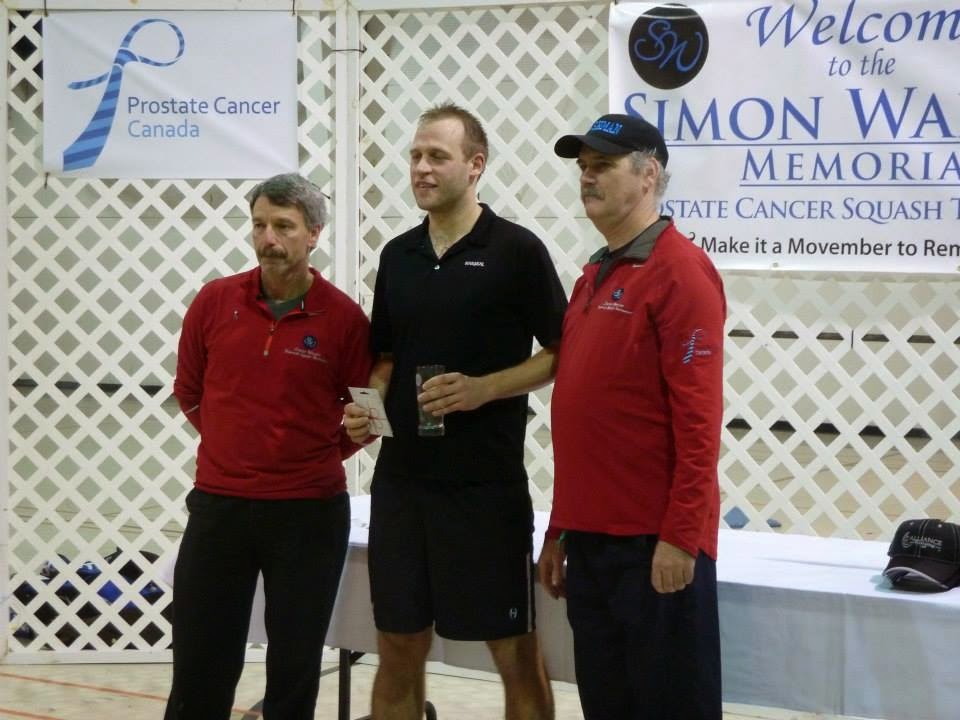 Graeme had his hands full with the young Ravi Seth in the semi-finals before edging him out 3-1.  However, come Sunday, Cameron Seth proved too young, too fast, too many shots, and a much better moustache.  All in all this was a really great tournament (that raised $11,000 for prostate research) and the Sarnia people proved to be great hosts.  They have promised an Open draw for next year so mark this on your calendar as a future event.
at 3:49 PM No comments:

I hope you had a great weekend.

No No shows last week which was fantastic.  I must however pass on peoples frustrations and the number of games that are being rescheduled.  I have had 2 players unfortunately say they will no longer be playing as all of their games have so far been rearranged.  Please remember you signed up to play on either Monday or Tuesday so please make every effort to be there.

The A noon league play offs will be this thursday.  Everyone will be playing at 12.15 this week and the schedule will be emailed out later today.

There are 2 weeks of regular play left before play offs start on Monday 1st December.  Please remember to get a sub if you can't play and record all scores outside the doubles court.

Just a reminder that Myself and Victoria are organizing a 80's party on Saturday December 20th.  There seems to be a bit of confusion about this.  We quite simply wanted to invite all our friends and those who have supported us this year to come along and have some fun.  We will be buying a keg of beer and some bottles of wine to get the party started.  You don't have to play squash but an 80's costume (fancy dress!!!) is preferred.

Please use the link if you wish to come along.

Long Drop Tournament.
Seve DeMarco and Jeff Brosseau have devised a fun conditioned game and have requested to roll it out as a Christmas Tournament.  It will be played on Friday 12th December from 3.15pm.  I will be sending out the rules shortly but if interested please email myself.  Once I have numbers I will send more information.  We already have 5 players confirmed!

Thanks to all of you for your patience over the weekend.  I know running tournaments causes disruption and am fully aware we have had a lot in a short space of time.  The feedback from visitors about our club was fantastic and this is because of the warmth of the reception.  I hope those who came to each enjoyed the entertainment and special congratulations to David Mill who won the under 19 event on his home turf.
Full results can be found by clicking this link and photos will be added to the blog.

Please see below this weeks update.

Firstly congratulations to Micaala Seth who won the Ontario Closed Championships in Toronto this weekend.  Seeded 3/4 she beat the 2nd seed Sienna Keating in the semi finals before defeating Team Canada Member and number 1 seed Hollie Naughton 3-2.  This is a great achievement for Micaala and hopefully the start of a successful period following injury.

This week was much better so thank you.  Remember 2 no shows results in removal from the league.

This weekend sees 80 juniors from across the province descend on Windsor.  We have already received praise on our organizational efforts and I am sure the experience the players have when hear will be second to non.  Can I remind you courts will not be available for members from 5pm on Friday until 4pm Sunday.  Feel free to come along and watch the top quality squash on offer and support our juniors as they compete against the best of the best.  We have a limited number of meal tickets available for members at the cost of $30.  They include cheese and wine on friday night, as well as pizza, breakfast Saturday and Sunday, Subs on Saturday afternoon and a seat at the Saturday evening meal over in Jackson Park.  Email me if you want to buy one!

There will be no juniors this weekend!!

We have made alterations to our Re-stringing service to hopefully improve value for money and service.  We are offering the following:

If you provide your own string we will charge just $20.  All prices do not include HST.  We also have introduced loyalty cards.  When you drop your racket off you will get a reward card which will entitle you a free restring after using us 4 times.

There is no squash this Friday due to the Tournament.  It will start again the following Friday.  There is a Friendly Match V the DAC planned for November 21st   at the DAC.  This is a fantastic opportunity to enjoy the facilities at one of the premier squash clubs in the USA.  If interested in this please email me to let me know.

Just a reminder that Victoria and I wish to invite you all to a Christmas 80's Party to thank you all for your support this year.  Instead of inviting you to our house we thought we would organize a fun tournament at the club in an 80's themed party.
If you want to come please complete the form.  It is free for members and $20 for non members.  We will be providing a keg of beer and food will be pot luck.

Have a great week

There was a buzz of excitement at the Windsor Squash & Fitness club this weekend as we held our first ever Squash Ontario Junior Event. After last year’s event being cancelled, we were delighted to attract 27 entries and run Boys Under 11 and 15’s events as well as a girls Under 15’s event.   The squash was exciting and played in a fantastic spirit all day.  Special thanks to Marcus Moceri, Niki Bistrev and Kabir Bhangoo who assisted in the running of the event. They were great at keeping the court schedule moving, collecting scores and updating the draws. We also awarded an effort prize for each division to a player we thought maintained high levels of effort in every match regardless of the result. 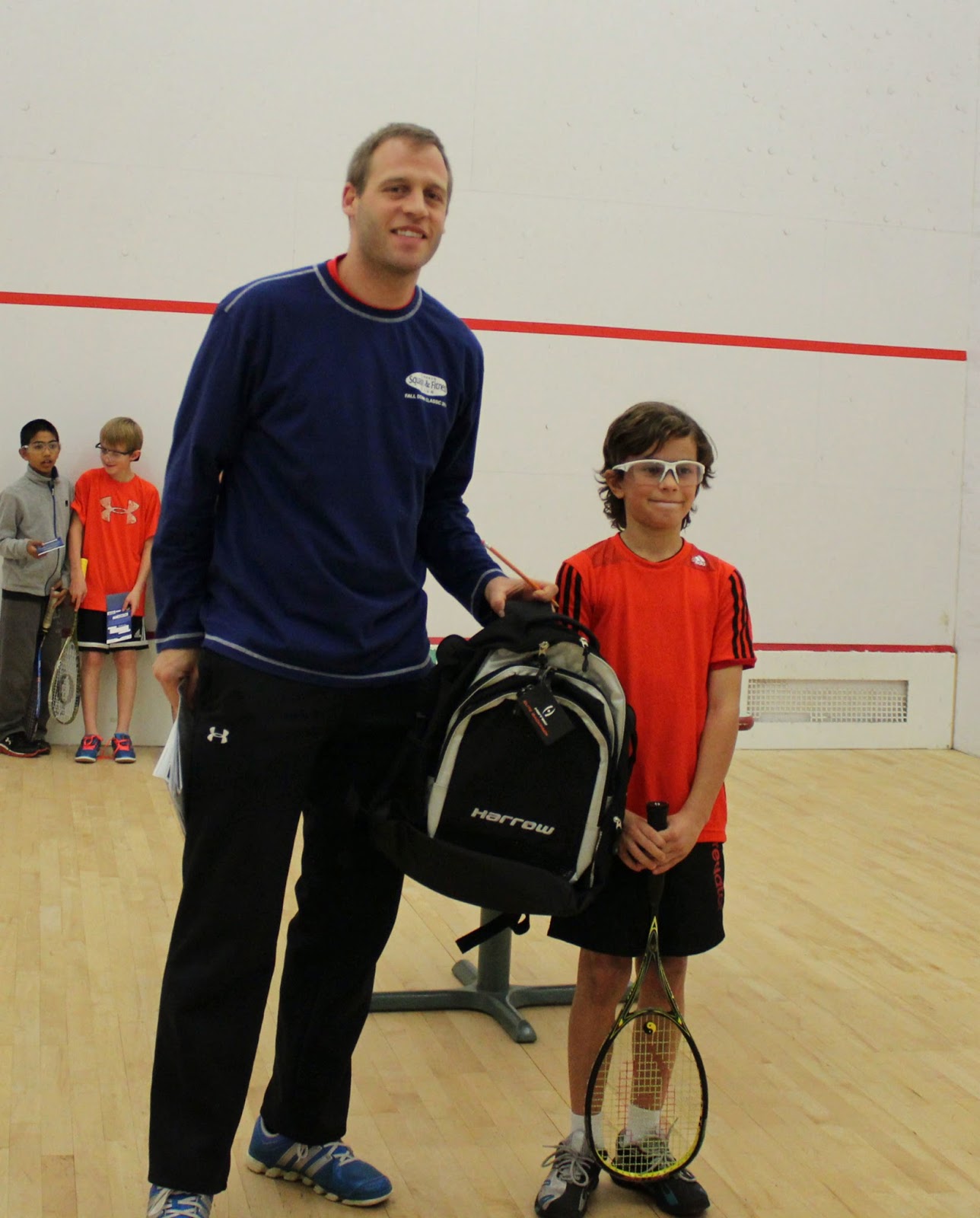 David Badalov from White Oaks proved too strong for the field winning all of his matches.  He won both his matches in the final round Robin 2-0.  In second place Sujai Shah from London played well throughout showing good promise for the future.  Third place went to Julian Attard who was playing in only his second event.  The effort prize went to Faazil Khan. 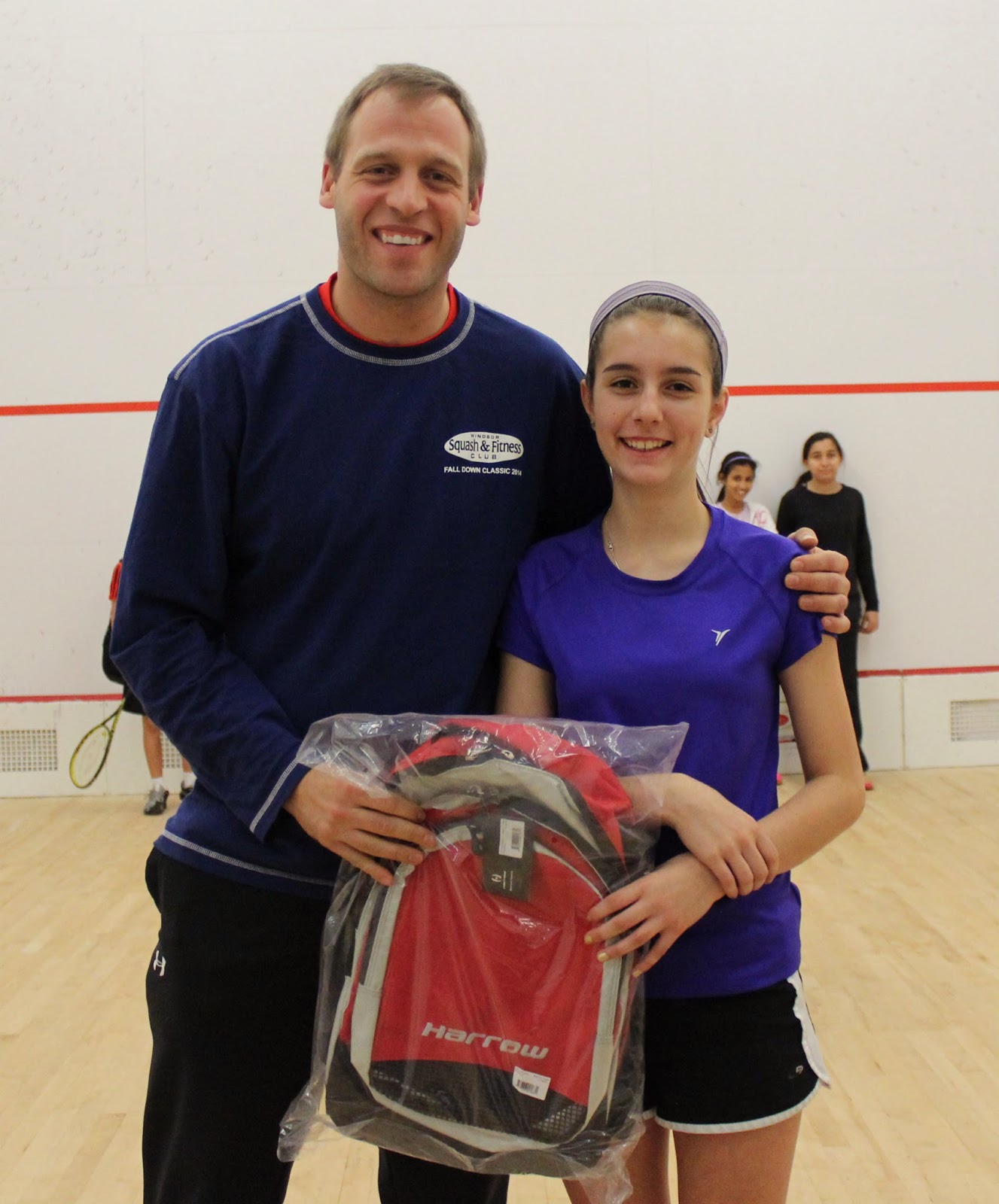 The Under 15 girls were made up of six players and on paper it was difficult to pick a winner.  In the end, Hannah Guthrie played some great squash to win the event beating Zara Khan 2-0 in the final.  Third place went to Aparna Maheshwari who beat her sister Annanya 2-0.  The effort prize went to Mackenzie Elliott.

This was the largest draw of the event and had 12 players.  There were some cracking matches, especially the semi final between Amin Khan from Windsor and Riley Bore from Sarnia.  After sharing the first two games, Amin took the third, 13-11.  In the final, Amin faced another Windsorite, Aaron Nagy.  Again the first two games were shared before Amin took the third, this time 11-9.  Riley Bore recovered to take third place and the effort prize went to Philip Dimitrov.

A huge congratulations to all who took part and many thanks to the parents willing to travel and make the event possible.  We hope to see you all back for the Gold Event! 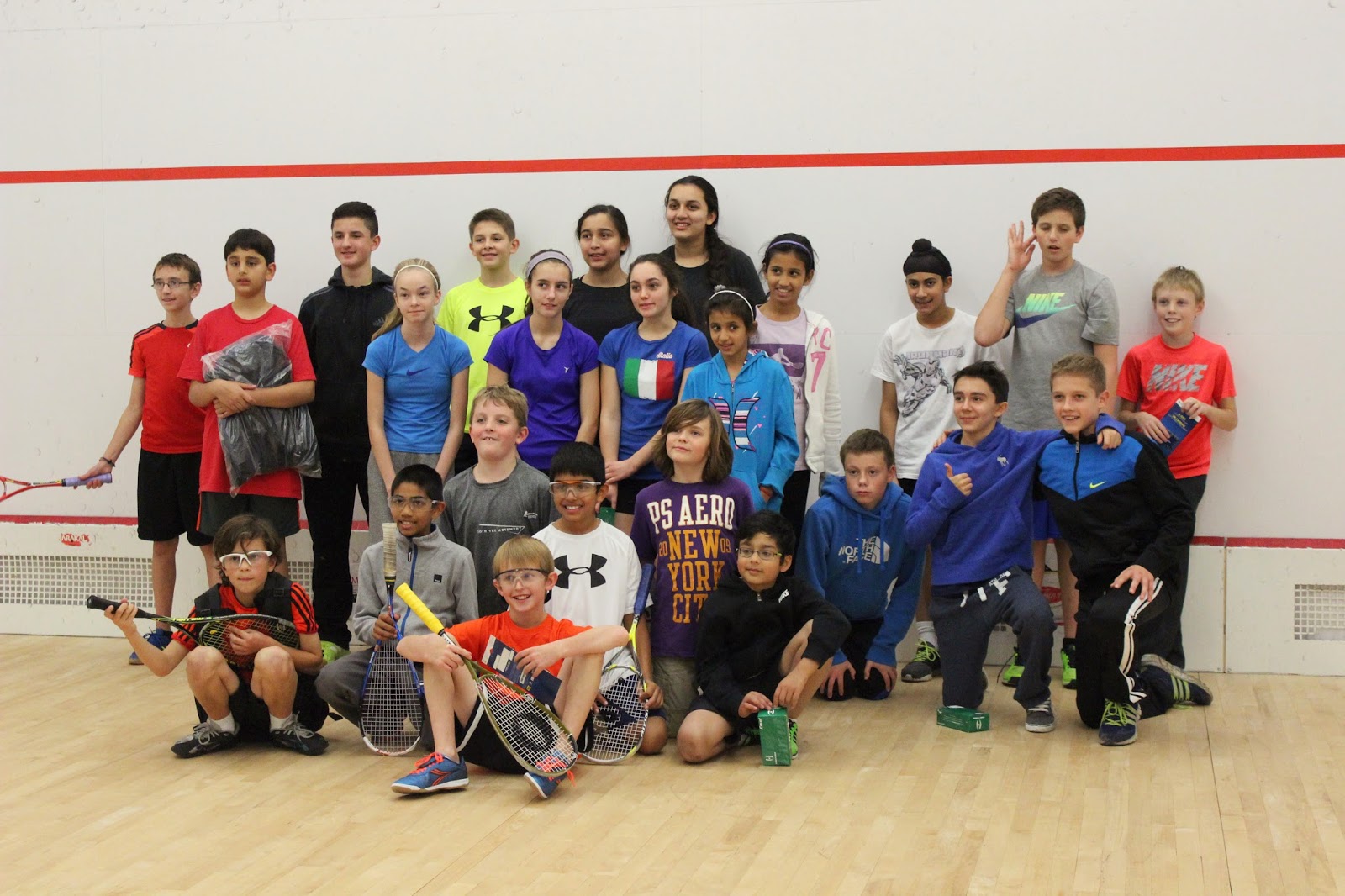 The Gary Waite Tour is played once a month throughout the squash season.  Each month it is played in a different location in Southwestern Ontario.  The Gary Waite Tour focuses on "fair play", "inclusion" and "fun".  It is not as competitive as the Silver or Gold events and is a great place for juniors to experience a tournament atmosphere while having fun at the same time.  As the Tour progresses, points are awarded based on participation as well as performance.  In other words, the more events you play, the more points that are available to you.
The weekend's event was unique since we had many players involved in the Silver event on Saturday, including many from out of town that opted to stay for both events.  Despite a full day of squash on Saturday, the juniors showed no signs of fatigue, something that many adults envied.
The final was a repeat of Saturday's Silver final between Aaron Nagy and Amin Khan.  Both finals could have gone to either player and on Saturday Amin came out on top.  However, on Sunday Amin could not close out the match when he had the opportunity and allowed Aaron take the match.
The 11-13 final featured a Groundhog Day match (as in it seems to happen all the time) between Luca Dalla Bona and Phil Dimitrov.  These two seem to battle it out in every tournament and always bring out the best in each other.  However, today Luca could not keep up with Phil's deft shot-making and surrendered the match to Phil.

The 10 and Under division played a round robin and Ananya Maheshwari came out on top.  Her drop shot and her retrieving ability was just too much for the others.
Many comments were made about the quality of play and sportsmanship that was evident all weekend.  All photos from all weekend events can be found here.  Follow the juniors on twitter (@wsfjuniorsquash) or on Facebook (wsfjuniorsquash).

On the weekend of November 21,22 and 23 I am heading to Sarnia to play in their annual tournament  with proceeds going to prostate cancer.   I would love for a group I us to go together!  Windsor favourite Micaala Seth will also be playing.   Please see poster for more details. 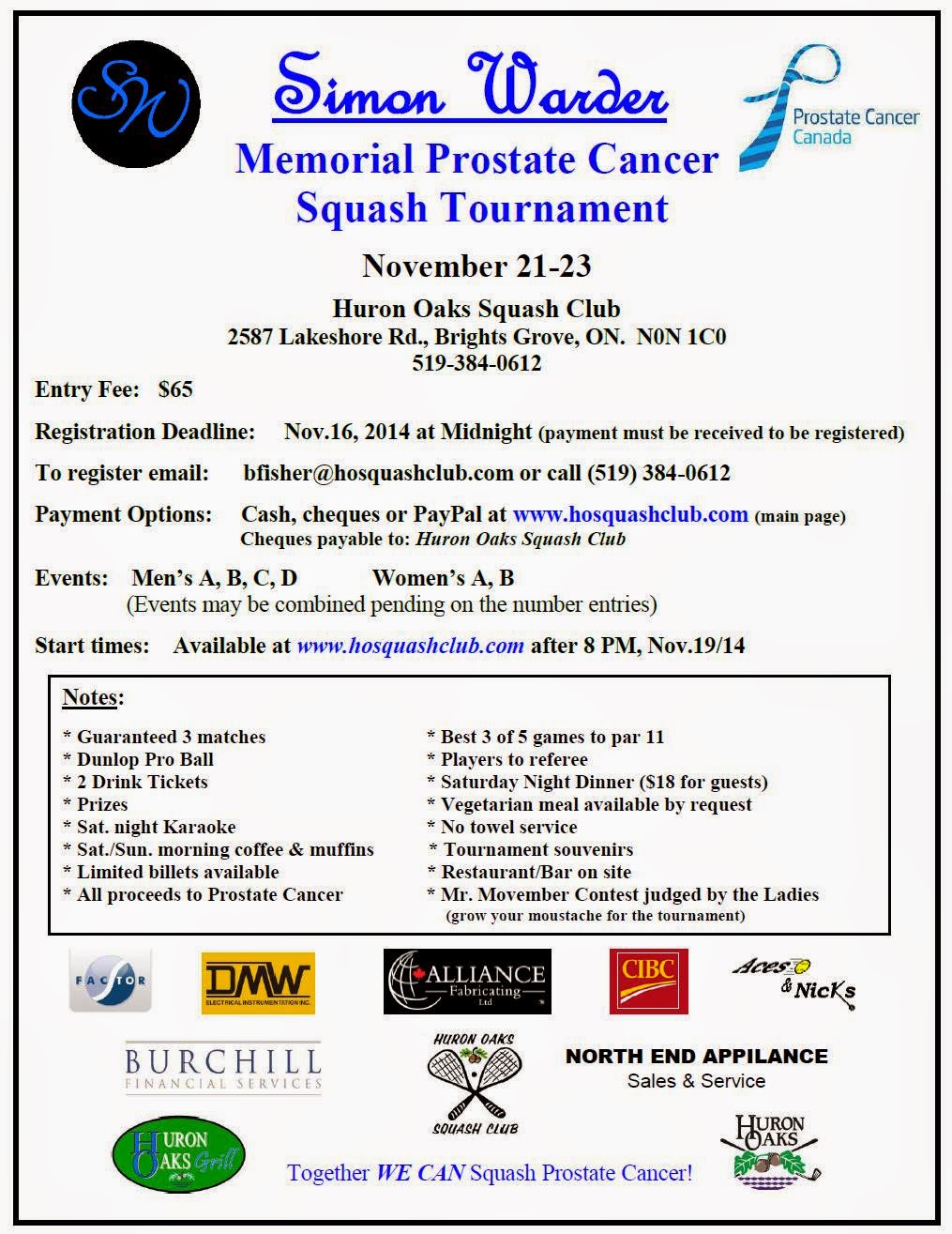