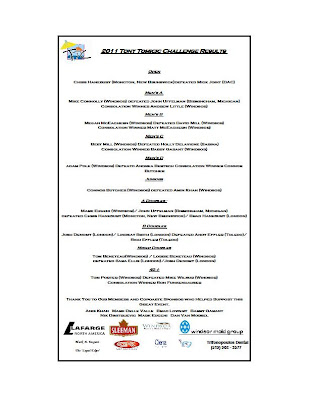 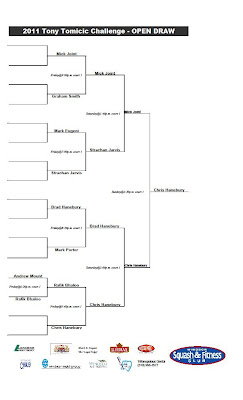 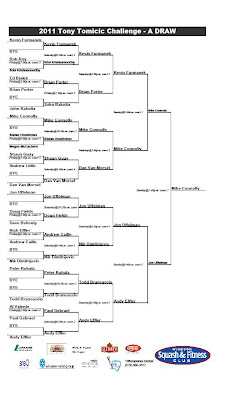 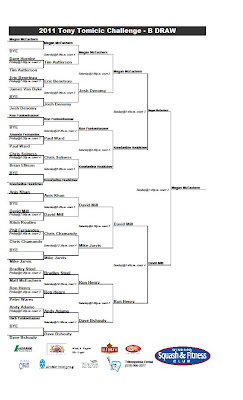 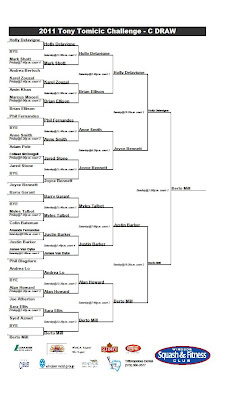 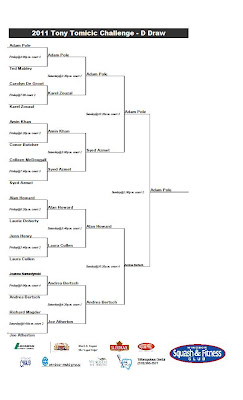 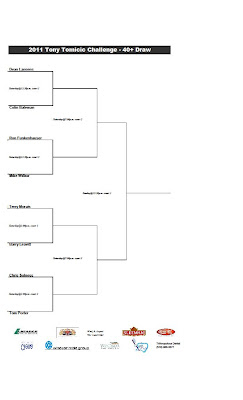 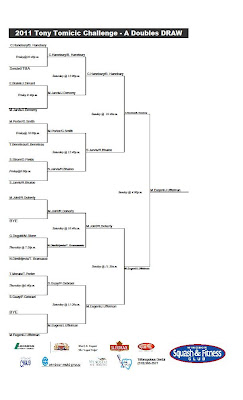 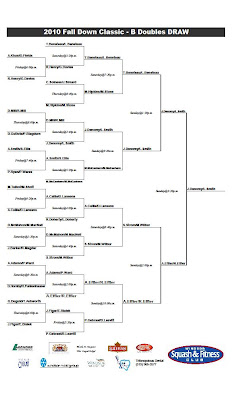 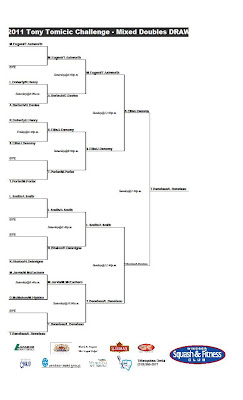 Click On Picture to Enlarge
at 7:38 AM No comments:

Windsor Squash and Fitness Club made their presence know in the MSRA Skill Tournament last weekend at the DAC. This year's event was the largest turnout in the past few years with over 50 participants. I would also like to thank Mick Joint, the Detroit Athletic Club and their courteous staff for allowing us this opportunity to play at their facility.

Was a very good draw, two excellent five game semi’s. In the first semi Mike Miller from Birmingham was matched against Rob Roy from Windsor. The match see-sawed back and forth, predictably went to overtime in the fifth. Rob had the first match point but could not capitalize, Mike got to match point, Rob hit a great passing shot into the backhand (left) rear corner, Mike took a desperate swing at it, connected cleanly – with the frame, and hit a boast winner into the nick. Wow!

The other semi was an all Windsor affair with Hugh “Mr. Metro/Mr. MSRA President” Stalker versus Barry “The Gentleman Bulldog” Leavitt. Another great five game match with the younger Mr. Stalker holding on to win over the seasoned (like fine wine) Mr. Leavitt. This set up a Stalker vs Miller final. Mike had both a speed and age (much younger than the ‘past 45’ Mr. President) and was able force a split of the first two games. At this point Hugh was able to take advantage of his experience and went on to a 3- 1 win.

Up to this point there had not been a…….significant upset in the tournament to talk about. In the top of the draw number one seed and (sorry) many times a bridesmaid, Greg Deeg again took a tumble, this time at the hands of Windsor’s Mike “Muscle-Shirt” Wilbur (when Mike plays in Windsor it is typically in a cutoff style – muscle-man shirt, thankfully he dressed appropriately for the DAC – thanks Mike) three games to one.

In the other semi the 2 and 3 seeds squared off, Lifetime’s Holmes Ahari vs Windsor’s Dave “Zippy” Guthrie. The experienced Holmes, not fully back from an injury, did not have quite enough for the younger Guthrie who advanced to set up an all Windsor final. Muscle shirt Mike, probably from having to carry the extra weight of both sleeves and a collar all tournament, just did not have quiet enough game left for the younger Guthrie, who zipped around the court to win in three close games.

The 5.0 draw was just awesome! Up until a late withdrawal just hours before the first round of matches, we had a 16 man draw. There were many close matches, and since some were played upstairs at the same time as some downstairs matches, unfortunately I could only catch some of each. However I can tell you that in the round of 16, Justin Warnock’s match against Jason Heywood was a thriller won by Justin in five games, after Jason had won the first two.

In the quarter finals all four matches were exciting, Kevin Furmanek in a very close win over Rob Munro from Lansing. Pete Ruhala, the other half of the Lansing duo, winning a match between two former Racquetball Champions, over the much improved Lifetime’s Ryan Covell. Justin in another very close match over Lifetimes Ricardo Ramos. Finally, Brian Porter winning a tight match against the DAC’s (and number 2 seed) Peter Logan.

On to the semi’s, Windsor’s Furmanek against the pride of East Lansing’s Pete Ruhala, back and forth with Kevin winning in five very close games. The other semi, an all Windsor affair with Justin “Mr. Techno Music” Warnock against Brian “Mr. Cool” (as in nothing fazes me) Porter. Another back and forth match with Mr. Techno prevailing in five close games.

This set up an all Windsor final between number one seed Kevin and number 3 seed Justin. Justin seemed to be peaking at just the right time, he seemed to be gaining confidence in his ability to “put away” the Prince squash ball. Kevin’s game, other than not quite finding the trick to putting the ball away, was awesome. With his quickness, court coverage and retrieving, he play was pro worthy and when needed, his play was patient and deliberate, forcing opponents into mistakes.

The final, first game back and forth, Justin hit’s a couple of late kill shots to squeak it out 11-9. Second game, Kevin covering the court like a pro, forces Justin into hitting some loose balls which Kevin takes advantage of to dominate and win 11-2. Third game Justin tightens his game back up and they stay within a point, sometimes two, up to eight each. Justin again finds a way to hit a couple of winners and squeaks out the third. Into the fourth, Kevin is noticeably the fresher of the two, knows he just needs to be patient and deliberate, no loose balls. Justin, with a game to give, can afford to gamble. Any small opportunity he is going for broke, hitting boasts, reverses, drops, and making some incredible hard drives just above the tin and aiming for the nick when Kevin leaves balls in the front court. Justin the gambler makes many more winners than errors to win the fourth game, and win the match three games to one, another great match to cap of the tournament.

To see the tournament draw and result sheets please visit http://www.michigansquash.org/
at 9:43 AM 1 comment:

The 2011 Harrow Canadian Squash Championships will be staged in Toronto at the National Squash Academy. It is the premier competitive opportunity for athletes from all provinces and territories. It recognizes the best players in Canada in all categories.
CategoriesMen’s and Women’s Open, A, 30+, 35+, 40+, 45+, 50+,55+, 60+, 65+, 70+, 75+
Companion Events: Men’s and Women’s B & C
Entry DeadlineThursday April 14th at 11:59
Prize Money$15,000.00 (Open Events)
For Complete Details Check Out:
http://www.squash.ca/canadianchampionships/2011/
Windsor Squash And Fitness Club is looking to send as many players as possible to this event. Please Contact Mark Porter squash@windsorsquash.ca or David Guthrie dguthrie@windsorsquash .ca if you are interested.
at 8:32 AM No comments:

(1) Keep eye on ball.
(2) Move quick to “T.” [Center court position.]
(3) Stay in crouch.
(4) Take big step [to reach ball].
(5) Keep ball far away from your opponent.
(6) Have many different shots ready so opponent does not know what you do next.
(7) Do not relax because you play good shot; maybe opponent retrieves that ball; better you get ready for next stroke.
(8) Soon as can, find out where opponent has idea to send ball; then quick take position for your return shot.
(9) Have reason for every stroke you make.
at 10:19 AM No comments:

2011 TONY TOMICIC CHALLENGE At Windsor Squash and Fitness Club!
The 2011 Tony Tomicic Challenge is coming up March 25, 26 & 27/11. Don't Miss Out. Sign Up Today. This Year's Event Is Going to Be Outstanding.

If any Individuals are interested in Sponsoring this year's event please Contact David Guthrie dguthrie@windsorsquash.ca or Mark Porter squash@windsorsquash.ca
at 9:39 AM No comments: