Some key matches were played on Tuesday to break up ties. Gino “The Conqueror” Longo of team Showtime played team Young Gun’s Jay “The Midnight Specialist” Patel in a critical match that would determine the outcome for their respective teams on Tuesday night. Longo and Patel have a long history of playing each other. They are both apart of a social group that plays every Thursday night that has allowed them to become good friends. Although their friendship was put on hold Tuesday Night as each was trying put their team over the top. As the match began both Longo and Patel were increasingly becoming frustrated and testy with each other. As well both of them made attempts to intimidate each other with occasional trash talking that made this squash match look more like an NBA basketball game. Despite this circus atmosphere Patel built up a two game to one lead when in the fourth game Longo jumped out to a large lead and seemed to be cruising along when he took his foot off the gas pedal. This failure provided the opportunity for Patel to storm back from a 5 – 12 deficit to steal the game and match from Longo. Following the match a clearly distressed Longo told Patel that he better not enjoy this victory too much because he planed to whip him the next time they played.

While Longo and Patel were doing battle on Court #3 there was another war being waged on Court #5 between Barry “Dive Guy” Garant and Peter “Easy Rider” Ryan. Garant and Ryan both have similar styles of play and I am not sure if you can truly put a name on their styles of play. They play with reckless abandon that has no regard for their physical bodies. Garant’s squash game has vastly improved over the summer and Ryan is a very experienced player who represented a good challenge for Garant. Unfortunately Ryan’s experience did not show up until the fourth game when Garant had already built up a 2 game to one lead. In the fourth Ryan game played in desperate fashion by out working Garant and forcing a fifth game. Ryan seemed to have regained his form and started to dominate Garant. The start of the fifth game was totally controlled by Ryan, who was on his way to a hard fought victory when something happened. Ryan’s gas tank went empty and had nothing left to finish off Garant. Garant quickly noticed the change and forced Ryan to run more. As a result Garant overcame Ryan’s lead and finished him in dramatic fashion. After the match Garant made the comment to Ryan that he knew he was going to win the match despite the large deficit that he had to over come in the fifth game.

Following matches on Tuesday night we will be taking pictures of the winning team so please stick around after your match. Thank You

Winner of the Free MSRA Membership and Shirt - John Hosapple - 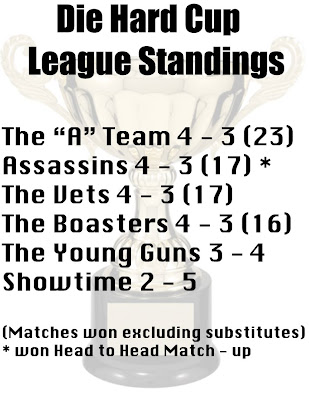 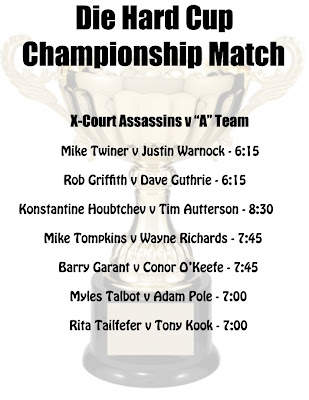 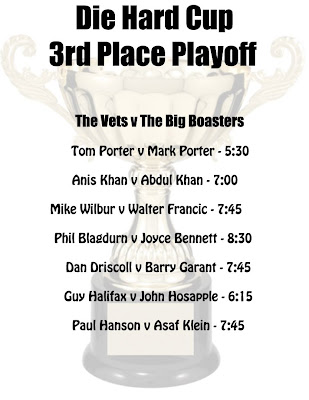 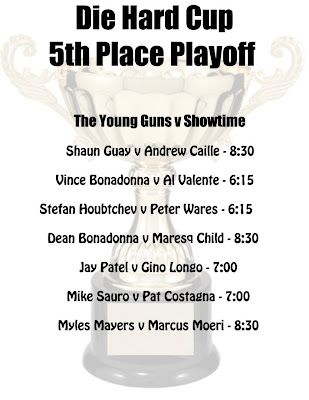 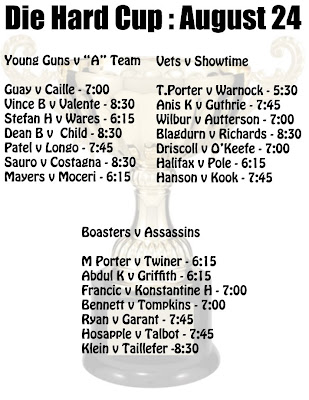 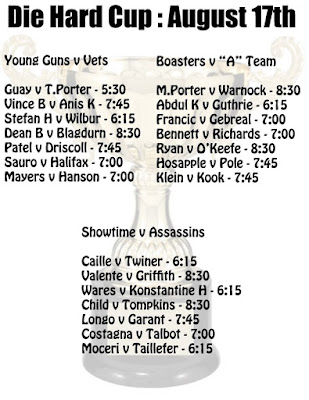 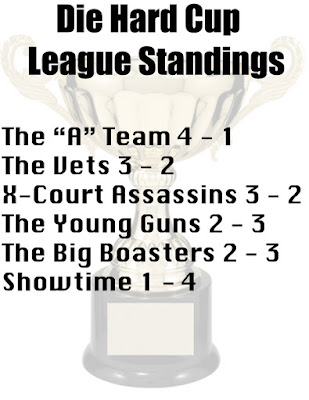 Tuesday marked the end of the regular season for Die Hard Cup action. Next week will be the first round of the playoffs. All teams will make the playoffs but everyone is talking about how impressive “The A-Team” has been. The A team has compiled a record of 4 wins and 1 loss. No other team has come close to that record. Team Captain Justin Warnock says his team is doing so well because of their extraordinary off court training regiment. Warnock would not give details on this training regiment out of fear that other teams might pick up on it. Although he did say that his skateboarding back and forth from the squash club has improved his court quickness.

The match of the century took place on Tuesday. Konstantin Houbhtchev vs Stefan Houbhtchev. This match was hyped up so much that people were comparing it to the first Ali vs. Frazier match. Apparently before the match strong words were being exchanged between the two Houbhtchevs. Once the two of them settled down they both played very good squash. The younger (Stefan) Houbhtchev had a clear strategy right from the start. He wanted to attack the older (Konstantin) Houchtchev and force him to be defensive. Although Konstantin has made a career of being a defensive player which would make Stefan’s strategy that much harder. After Stefan quickly stole the first game Konstantin’s defensive style started to wear down and frustrate the younger Houbhtchev. The match was all tied in the third game when Stefan regained his composure and started to make some tough shots that Konstantin could not get to. This allowed Stefan to roll through the third game and put the pressure on Konstantin in the fourth game. In the fourth not much changed for Konstantin as Stefan continued his onslaught of tight shots that allowed him to easily triumph Konstantin in the fourth game. Following the match a deeply frustrated and distressed Konstantin said that he was taking away Stefan’s allowance for this week.

Following the match of the century, came the match that was being billed as the modern day “Battle of The Sexes”. Instead of Billie Jean King playing Bobby Riggs it was Joyce Bennett playing Phil “Tin Man” Blagdurn. Bennett has made a name for herself as being a very determined player that likes to have long rallies but she may be better known for her never quit attitude. Blagdurn on the other hand likes to live a little more on the edge with a wide range of different shots to throw off his opponent. His favorite shot being the reverse boast. These contrasts in style of play would make for a great squash match. Blagdurn jumped out of the gate early by capitalizing on some of Bennett’s early unforced errors but Blagdurn struggled to maintain this early lead as he started to hit the ball excessively into the tin. Luckily Blagdurn held on to win the first game. In the second game Blagdurn continued his onslaught on the tin that had many in the audience wondering whether the tin would remain on the wall. Blagdurn was hitting so much tin because Bennett was forcing him to rally longer than his body would allow him. After the 2nd game the match was all tied up but it really looked like Bennett had Blagdurn on the ropes. In the third game the match seesawed back and forth with neither of them giving up anything but somehow Blagdurn dug deep and stole the game. This new found energy propelled Blagdurn to win the fourth game also. Following the match Bennett made it clear that she let this victory slip away and warned Blagdurn that things would be different, if they played each other again.

Die Hard Cup action on Tuesday Night can be summed up in two words “spare night”. Thank you to all the spares that filled in for the regular players. I think we might have had more spares playing Tuesday than regular players. I believe everyone is on vacation and who could blame them with the weather we are having. Despite this we still had some great squash action being played.

Adam “Professor” Pole is one of WSF’s most avid league players. During the day he serves as history professor at the University of Windsor where he’s known among his students as a hard ass who is very strict and marks very hard. Some students call him the Punisher. While at night he is a die hard squash player who is known for his friendly and sociable nature on and off the court. He is always the first one to buy everyone beers following his match. Even offers to buy everyone pizza on league nights. Well that friendly nature went out the door when he found out his opponent was Mike Sauro who is a student at the University of Western Ontario. Once Pole stepped on the court he became the punisher again. Pole made everything hard for Sauro. The rallies were short and testy as Pole did not want to give the younger Sauro any chance. Sauro played through this adversity and pushed the match to a fifth game. In the fifth something happened to Pole and he relaxed his punishing ways. As result he started to play better and improved his shot selections. The fifth turn out of a landslide for Pole and to everyone’s surprise Pole offered to buy Sauro a beer after the match.

Al “Mr Travel” Valente has been beating up everyone in the league and Tuesday provided to be no different but proved to be a little hard. His opponent was Anis “Smasher” Khan. Valante’s patent boast was a little off in the early going and Khan was all over the court showing his lightening quickness despite his tall stature. This match proved to be the best match of the night as it seesawed back and forth with neither of the them give up an edge. Some of the rallies were so long that they had a hard time remembering who served to start the rally. As the match wore on Valente’s boast started to catch the nick which Khan could not counter. This allowed Valente to prevail in the fifth. Following the match Valente informed the league directors that he would be on vacation the next two weeks and will not be around to play his final two matches. Rumors is this “so called vacation” is Valente’s attempt to avoid playing me (David Guthrie) next week in the league.

Next Week – The Match Of The Century – Konstantin Houbhtchev vs Stefan Houbhtchev – Don’t Miss This One. 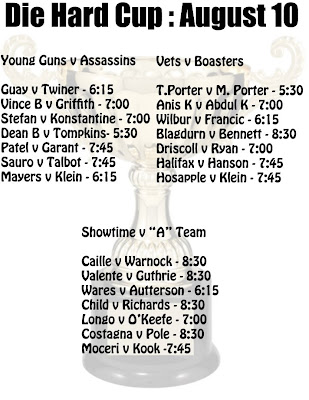 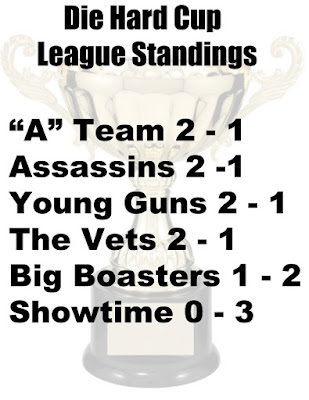