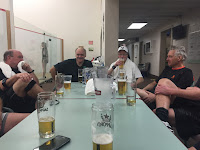 On Saturday afternoon 16 squash players competed in the 2nd annual softball doubles tournament.   Softball doubles is played with a softball on a singles court.  That may sound crowded but you would be surprised how much room there is.  Here is a video on softball doubles.  Keep in mind that this is being played on an actual softball doubles court.
It was a very eclectic collection that gathered to compete for the $80.  On paper it appeared the favourite teams were Kabir Bhangoo/Ryan Guthrie & Graeme/Phil Dimitrov.  Matches were very close and no one team was dominating.  The semi finals saw Dalla Bona squared play Guthrie/Furmanek.  On paper the team of Craig Guthrie/Stan Furmanek didn't put fear into anyone.  However, once they stepped on the court the magic began.  After shaking off the rust in the first few games, Furmanek caught fire, hitting winners all ofter the place.  It was too much for the Dalla Bonas and they were relegated to the 3/4 game.  On the other side of the draw, Willams/Dimitrov took on Obremk/Demarco.  Obremk/Demarco are crafty veterans of softball doubles and were too much for Graeme/Dimitrov to handle.
The finals were a rematch of the first match of the night in which Obremk/Demarco dominated Guthrie/Furmanek.  However the finals were a different story.  It was clear to all the spectators in attendance that all the squash during the afternoon had taken a toll on Obremk/Demarco's fitness levels.  Guthrie/Furmanek appeared to get younger as the day went on.  In the end, Guthrie/Furmanek took the match 2-0.
All in all, it was a fun day of squash and everyone is already looking forward to the next tournament.
at 10:17 PM No comments: 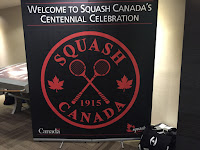 294 of the best juniors from all around the world descended upon White Oaks this weekend.  The calibre of squash was so high it made a typical Ontario Gold event look like a mid-summer training session.  Players that have dominated the Ontario circuit were suddenly struggling with these new players.  12 of our juniors set out to match their skills with the rest of the world.  After the first round, only Stefan Houbtchev (still technically our junior playing in his last junior tournament), Berto Mill and Natasha Pensler remained in the main round.  That said, everyone of our juniors played strong and were able to stay in many rallies. 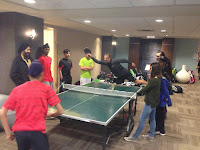 In the consolation round we started to find some more success.  Sara Khan, Amin Khan, David Mill, won and advanced to the next round in the consolation.  Stefan was defeated in the second round of the main draw and ended up playing his old training partner, David Mill, in the next round.
As the tournament headed toward Tuesday, less of our juniors remained in the draws.  Stefan was forced to withdraw in the 4th round of the consolation due to an injury.  Aparna and Ananya met each other in a sister showdown in the finals of the Bronze draw with Aparna winning it in the end.  But the highlight for Windsor Squash was Natasha Pensler.  Although Natasha lives in the states she has been coming to Windsor to train with our juniors.  Natasha lost in the finals of the U13 to a fellow American.  Well done Natasha!
Despite being a very long weekend, the juniors gained a lot of experience playing, watching and listening on how to be successful at such a high level.  Complete draws can be found here.  Follow them on Instagram @ windsorsquashandfitness
at 4:44 PM No comments: