This past weekend 12 juniors took part in the first gold event of the season at Mayfair Parkway.  All juniors played really strong.  Amin Khan easily advanced to the semi-finals of his draw until he came up against the #1 seed.  Amin played every game very strong and both players put on a display of shot-making and retrieving.  However, Amin was edged out in a tight match.  Amin would go on to finish 4th in his draw.  Aaron, Sara and Ananya persevered in their draws to win the Bronze divisions.
This same weekend also saw the first Grand Prix event in Windsor.  This is a monthly series that is being run on Sunday afternoons for players new to the game looking to get some tournament experience.  Strong performances were turned in by Rajun Sandhu, Colin Moore, and Kolton Brosseau were top players this Sunday.
at 10:33 PM No comments: 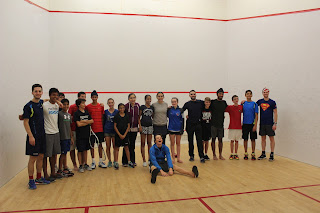 Saturday was a busy day for Windsor Squash.  Many of our players headed over to the Detroit Athletic Club to compete in the Cross-Border.  It was a tough day for Windsor especially since we have been dominating the Cross-Border.  It was all the USA on Saturday as they won a large majority of matches.  Thanks to all players for playing and representing Windsor (or Canada).
Many players headed back to WSF after the cross-border to watch the pro exhibition between Ben Coleman (WR 50) and Anthony Graham (WR 162).  The players hung around all day, giving lessons and helping with the juniors.  In the evening, the players entertained a crowd of 40 with long rallies, incredible shots and witty banter.  After the exhibition they answered questions, signed autographs and helped the juniors celebrate Jagroop's birthday.  The pictures from the evening can be found here.
at 9:11 PM No comments: 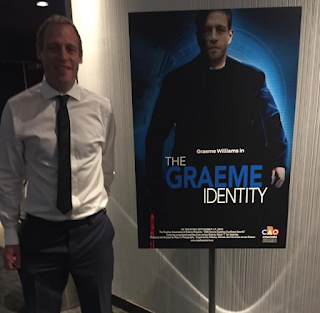 Congratulations to our very own Graeme Williams.  This weekend Graeme was honoured as Coach of the Year at Coaches Association of Ontario in Toronto.  The Ontario Coaching Excellence Awards Program celebrates the dedication and commitment of exemplary individuals who inspire, innovate and share knowledge of sport with others. The Awards recognize the importance of leadership, performance and the value of human insight which are all integral to great coaching.   Pictures of the ceremony can be find here.

Email ThisBlogThis!Share to TwitterShare to FacebookShare to Pinterest
Labels: coach, coach of the year, graeme 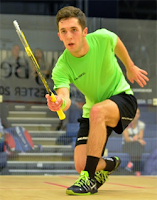 As a thank you to the Windsor Squash and Fitness membership for all their support of the junior program, they are hosting a professional exhibition match between Ben Coleman (WR 50) and Anthony Graham (WR 90) this Saturday at 6:00.  The players will be helping with the
juniors during the day and having their exhibition after.

The event will be catered and we  are covering the costs of all beverages.  Drinks will also be provided during the Monday and Tuesday leagues (until supplies last).   Please sign up here if you are interested in attending.     Junior Committee.
at 9:58 PM No comments: