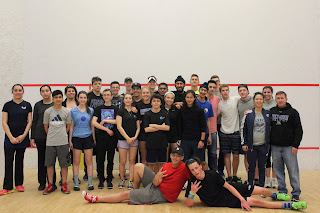 Jim Mason left an indelible mark on Squash in Ontario.  He was a passionate advocate of students in high schools playing squash.  Hence, the Jim Mason Cup.  This event has been held every since the mid-80s and currently Executive Squash and Fitness is the host club.  While it is not currently a sanctioned OFSAA sport, efforts are being made to make it one.  This year 16 schools and 150 players took part in this event.  From Essex County we had 3 schools send a team to the tournament, Kennedy, Massey and Tecumseh Vista.   All told, we had 34 players from this area playing.
The tournament is divided into male/female, junior/senior, ranked/unranked divisions.  All players earn points toward their team's total.  At the end of the tournament, each school's highest 6 points are added up to determine the winning school.
Kennedy was returning to this tournament for the second year in a row.  Grace Kim has been working with the players for two years now and you could really see the improvement in their play.  Her top male player finished 21st in a draw of 64 players.  Gina Marinelli was the sole female representative from Kennedy and this year she moved into the more challenging ranked draw.
Massey is a growing team and one that will be very good in the near future.  Idrees Syed made his tournament debut and despite losing a couple of close matches early,  he came on strong at the end, winning his last two matches to finish 45th out of 64 players.  Zhara Khan won the consolation draw, Alex Mroczkowski finished 6th of 63 players in the seniors boys unranked draw and Sara Khan was her usually steady self, finishing 2nd place in the tough girls ranked draw, while Mackenzie Elliott finished 4th in the same draw.  With only 5 players that was still enough to earn Massey an amazing 5th place.  Look out for them next year!
Tecumseh Vista entered a large team (22 players) and had players in every division.  This tournament even brought Berto Mill out of the woodwork.  Despite not playing a squash match since last year's tournament, Berto picked up where he left off and managed to make it to the finals of the senior ranked draw.  Berto finished 2nd while Kabir Bhangoo finished 3rd and Ryan Guthrie finished 5th.  Jagroop Bhangoo also finished with a strong 5th place performance in the Junior Boys draw.  Luca Dalla Bona won in an exciting and standing room only final of the junior draw.   Hannah Guthrie finished 3rd in her division. 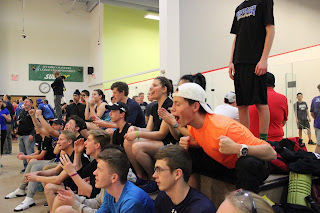 In the unranked division, Colin Moore placed 5th, while Simone Jankuloski also finished 5th and Rajan Sandhu finished 3rd in their respective draws.  You would have thought that would be good enough to bring home the trophy but Lawrence Park(Toronto) completely dominated every single draw and won easily.  Despite a very strong performance, Tecumseh Vista finished in 2nd place.
This year they also added a doubles event.  1 team/school.  Ryan and Kabir represented Vista.  They made it to the finals where they ran up against none other than Lawrence Park.  If a match can represent the weekend this was the one.  Despite playing great, they lost 15-13 in the deciding game.
For me, this is the most fun tournament of the year.  Teams show up to watch their teammates play, cheer loudly and clearly are having a great time.   The highlight of the weekend for me was the Colton Allen (Kennedy) and Jack White (Vista) match.  For only a team of 5, Kennedy managed to cheer the loudest (see Instagram post).  Every single player from this region demonstrated exemplary behaviour on and off the court and represented our region in a very positive manner.  Pictures from this event can be found here and complete draws can be found here.  Squash Ontario's recap can be found here.