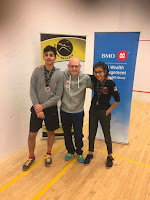 This past weekend 10 of the WSF juniors competed in the BMO Nesbitt Burns Ontario Closed tournament.  This is one of the biggest tournaments in Ontario as it counts for points to make Team Ontario at the Canadian Winter Games.  In other words, the best players came out including those that are playing on University teams.
The highlight of the weekend was Ananya Maheshwari.  Ananya was seeded 2nd in the U15 draw but her first round opponent pushed her to a tough game 5 which Ananya was able to win.  After that, there was no looking back for Ananya as she end up defeating the #1 seed in 4 games, making her the U15 Ontario Champ.
Our other highlight was Amin Khan.  Amin was coming off a win at our tournament and came into this tournament seeded #3.  Unfortunately, Amin couldn't beat a hot Dylan Deverill as he did in the last tournament.  However, Amin went on the win the bronze medal in the U17 draw.
Other highlights from the weekend include our newly-adopted Phil Shillington.  If you haven't met Phil yet, he is a co-op student from Ottawa who has been helping out Graeme and Dave.  Phil is relatively new to the Gold scene, coming off a recent victory in a Silver tournament.  Phil ended up playing on Sunday in the Bronze division final.  Phil quickly went down 2-0.  However, he snuck out games 3 & 4, pushing the match to a game 5.  Phil ran out to a 9-2 lead, only to have his opponent tie the match at 10-10.  They went back and forth for many points until Phil finally emerged with a 14-12 victory.
Jagroop Bhangoo and Hannah Guthrie both played stellar by beating higher seeds in the their draws.  Jagroop lost in a very tough consolation semi-final match.  Hannah shook off one of her nemesis and won the Bronze division.
Vishaal Mehta continued his improved play and also took home the Bronze division crown.  Usman continued to give all his opponents tough matches and never going down without a fight.  Sara Khan drew top seeds early on but played them tough.  Luca Dalla Bona made his return to provincial level squash and played like he never left.  Complete draws can be found here.  Next up, the Canadian Open at White Oaks.
at 7:22 PM