Windsor Juniors Do It Again!

Another busy weekend for our juniors as they participated in two tournaments this weekend.  The 3rd round of the Gary Waite Tour took place in London this weekend and 9 of our juniors braved the bad weather to participate and it turned out to be a Windsor-dominated event.  Imola Nagy took another big step on her squash journey as she defeated fellow training partner Olivia Bhatti to take the the under 13 division.  Brendan Karpala has shown much dedication to squash and it is paying off at he took the over 13 division.  I am sure that we will be hearing more about these players in the next tournament. 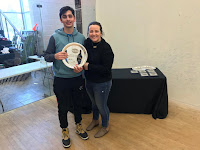 Another group of our juniors were in Toronto competing in Gold #3 at Ontario Racquet Club.  Amin Khan was outstanding in his play all weekend.  In a great final match, Amin showed great retrieving and shot-making ability.  It was tight all the way until the end and Amin was able to pull out a very nerve-wracking (if you were in the crowd) 5th game.  Congrats to Amin for winner another Gold tournament.
Sitting in the audience watch our Gold players players, I listened to a couple of parents talking and they were in awe of how much Windsor players have improved and the fact that Windsor is now
considered the strongest program in Canada.  Those accolades are really due to everyone at Windsor Squash and Fitness that has sacrificed and supported the junior program.
at 9:26 PM